(And now, a special weekend update from Dana Conway) 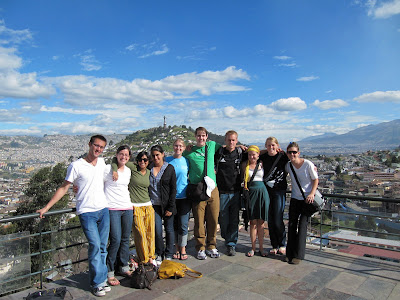 "So as you've heard, it is in fact true. The new Program Directors arrived late last week and have been through a whirlwind of events beginning with orientation in Miami, meeting the Nicaragua team along with MPI's staff, juggling their way through customs with the swine flew scare, waking up in home stays with Ecuadorian families, being shoveled into one-on-one language classes for four hours a day while also taking salsa lessons, visiting city parks and worrying about what Spanish homework they have due the following day . I'm afraid we've barely given them enough time breath, let alone to decide if this is at all what they had in mind as the beginning of a year long adventure.

I was lucky enough to get to spend the last few days with our new PD's in Quito, exploring the city and introducing them to all of our favorite hang outs we have discovered in the past year. Hearing all of their questions and inquiries, I was quickly reminded of my first days in Quito and my first impressions of what would be come my new home. While I had an experience different than most, spending my first three weeks in the city alone, seeing their wide eyes and exuberant stairs brought me right back to where I was nine months ago. The city felt unimaginably large, the buses were just as confusing as they were intimidating, and the way the metropolis tangled into every corner of these heaping mountains was more stunning than any city I had ever seen. While some of that has changed, (I now know my way around Quito and exactly how to get to the places I need to go), I still loose breath at the site of this massive capital tucked away into the Andes Mountains. Despite that I have been here for months, I blended right in with the all the new kids as we gazed in awe looking down into chaos from the western hills above.

Now it is beginning to sink in that these are the people I will get to spend my next four months with, living and working and learning with each of them. From the start of my time with Manna I have been the newbie, arriving late and consequently leaving late too. And here I am once again, the awkward newbie. Their four days in Miami and synchronized schedules for the next three weeks left me wondering if I would be set apart from the nine of them once we began our work in the valley. Fortunately, I'm confident we did one hell of a job selecting applicants and no longer fear forever being the newbie, but now instead dread the thought of only having four months with these guys, while they get to have thirteen with each other.

These next few weeks will prove to be quite the challenge sorting out how to let go of the people who first welcomed me. Together we formed a bond with each other that is not only stronger than anything I have ever experienced amongst so many unique people, but beyond irreplaceable; Its hard to imagine my daily life here without them. However change is often refreshing and usually for the better. Therefore I cant wait to see what kind of exciting things this change will bring.