Today marked the end of Jocelyn’s 2 week English refresher course for students in the San Franciscan community, and I got to tag along with her to host an ‘art hour’ to break up the dry (but direly needed) grammatical review. Considering Jos also baked sugar cookies and saved the last 30 minutes for a lively game of twister, I clearly chose the right morning to join her in the classroom. Her students were seriously hyped up even before we fed them cooked sugar and butter, but Jos handled it like a pro, not getting frustrated or discouraged but encouraging them to ‘escucha con dos orejas, por favor” (listen with two ears, please) and trucking right on through those conjunctions. She is definitely well prepared for the start of our Apoyo Escolar program, an after school homework help class that starts on Monday. 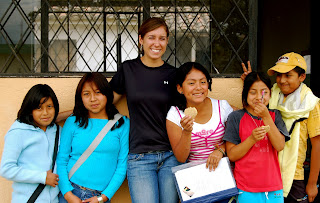 After shooing the little ones out of the Casa Barrial (the community ‘house’ in which we host our programs), Jos and I started our walk out of San Francisco to catch a bus back to home sweet Conocoto. Who knew we would still be at the bus stop 45 minutes later, having been snubbed/rejected/turned away from 3 buses. Maybe this doesn’t sound like that big of a deal, but when you’re used to a quick ride home and you’re really hoping to beat the rest of your housemates to the leftovers from last night’s dinner, it becomes a huge deal. We’re talking about enchilladas and avocados here, people. I'm starting to get worked up as I type this.

Bus 1. Has a sign that says "To Conocoto" on it's front window. So why, then did the driver tell us “Ahhh...hoy no vamos a Conocoto” (Ahhh, today we’re not going to Conocoto). Ok, that makes no sense, but fine, off we hopped.
Bus 2. The driver encourages us to get on under the alluring promise of “Si, si, claro vamos a Conocoto, ya ya...” only to tell us 5 minutes into the ride that, oh, actually we’re heading over there AFTER we go to Quito. Considering we didn’t want to take an hour bus ride to get somewhere 10 minutes away, we obviously hopped off in the middle of the road. Which road it actually was turned out to be a little less obvious. If there’s one thing Jos and I love, it’s being stranded in the middle of nowhere, Ecuador. Have I mentioned that very few (read: probably 7) roads in the whole Valley have street signs? Great.
Bus 3. Doesn't even acknowledge us, despite Jocelyn’s excellent hand flagging motions.

Two seconds later the first bus we were on came screeching around the corner, the passengers inside chuckling to themselves at the idiotic gringas (read: us) who still haven’t found the right bus, covered in mud up to their shins (huge thunderstorm last night) standing next to a woman with a goat on a leash. Lovely.

Regardless, we made it home, stopping by the Panaderia for some much needed bread to lift our spirits. And guess what? We still beat everyone else to the leftovers. Sweet, sweet success.

Until Monday,
Holly
Posted by Holland at 4:09 PM No comments:

(Today's guest entry comes from Mark Hand, MPI Ecuador's Country Director and all around instigator. He is currently working his way through Wilentz's "The Rise of American Democracy", still hasn't beaten Zak at cuarenta, and 'loves' serving as sous-chef every Friday evening.)

Since I first read Malcom Gladwell's The Tipping Point, I've fancied myself to be what Gladwell calls a connector - not necessarily the guy who knows where all the information is (mavens), or the gal that convinces everybody they should buy this product or join that cause (salesmen), but the guy who gets a real kick out of introducing people that really ought to know each other.

I got a chance to do just that kind of introducing this weekend, when I went to DC for a meet-up of internationally-focused student groups hosted by a coalition called UCGH. I did, in fact, get a kick out of finding and creating connections among the folks there, and look forward to some 'output' from this network sometime in the very near future. Just to give you an idea, one of the projects we'll be working on is a one-stop online shop for internationally interested young people. Part of that will be easy-to-use tools, like this one, to help students determine how to get plugged into international opportunities:

Mark
Posted by Holland at 5:09 PM No comments:

Email ThisBlogThis!Share to TwitterShare to FacebookShare to Pinterest
Labels: Mark

Hi. I know what you're thinking: Holly, the Daily Life blog has only been up and running for 2 days and you've already started slacking, ahh... where have you been for the last 5 days?! I'd like to take this opportunity to explain a little something we like to call "s.w" or Shifty Wireless. Ok no, we actually don't call it that, but I am putting in a concerted effort to help it catch on. Every once in a while, for reasons beyond our understanding, our internet signal up and leaves us in a manner reminiscent of the Keith Urban song "You'll Think of Me". Considering we've all spent the past few days dreaming about wireless internet, the similarities are quite strong.
In the most recent case, Friday morning rolls around, Jos and Dunc headed out to English class, and with them went our sweet and precious internet signal. We thought it was just another one of those random, inexplicable technological failings. Apparently we were wrong. Turns out (thanks to Dunc and Eliah's investigative skills and countless phone calls to the internet company) our connection was terminated because of confusion over a bill payment. Note: we paid the bill, it was the company who was confused.
Regardless, the signal is back, albeit currently limited to a single cord connection. Now begins the task of sharing between 10 of us one internet cord. I would propose a UFC wrestling match to determine priority, but considering Mark almost broke Dunc's rib the last time that happened, not sure that'd be the best idea.
Happy belated birthday wishes to Luke, and stay tuned for Mark Hand's first guest blog tomorrow!
Best, Holly
Posted by Holland at 2:04 PM No comments:

Starting this past Monday, Jocelyn and Dunc have been teaching an intensive English course for students in the San Franciscan community. Lasting two weeks, the course is designed to act as a refresher in order to prepare the students for the start of school come September 1st. They have five students enrolled, and come back each day a little exhausted, absolutely famished (first thing Jos does is get out the ketchup, regardless of what's on the lunch menu), but positive about the progress their students are making.
This morning, however, they came back in a frenzy. Eliah, Annie, Luke and I were all working on our respective computers (writing program proposals, researching for upcoming projects, emailing the Ecuador09 listserve an obnoxious amount of articles, the usual) when Jos and Dunc came bursting through the front door, each talking a mile a minute. Turns out this morning's class veered a little off course.
Apparently a pregnant cow had picked the grass right outside the Casa Barrial (building where we host our programs) to give birth at 8:30am, to the astonished horror of Jos and Dunc. The cow's labor noises, coupled with the early morning downpour of rain, flustered Jos so much that she used a little too much force in her attempt to open the lock to the Casa Barrial, snapping off the key head while leaving the body jammed in the lock's interior. Thus, the class trudged over to the Cooperative to search for help, managing to find someone with an enormous saw to effectively destroy the lock. After buying a second lock and key and tracking down the rest of the students who had dispersed in the rain-soaked chaos, the group was finally able to start class an hour later. The mother cow (now eating the umbilical cord) and her baby also joined them for a few hours of English grammar.
It speaks to Jos and Dunc's ability as teachers that they were able to run an effective class after all of the morning's excitement. There never is any way of predicting what exactly will happen on any given morning here in the Valley, but that's part of the adventure of it.
Until tomorrow,
Holly
Posted by Holland at 1:56 PM No comments:

Welcome to the World, Little Blog

Hi and welcome to the freshly minted 'daily life' Manna Ecuador Blog!  This little guy was born out of a desire on our part to offer those who are interested a more in depth look into what exactly goes on in the Ecuadorian world as see through the lens of Manna Project International.  Thus, here stands our brand-spankin' new blog.
I, Holly Ward (of the soon to be released monthly email updates), will be updating this blog daily with tidbits about life in the house, the ever-evolving status of each of our various programs, random (but much sought after) information regarding fellow PDs, ideas we're spitting around regarding potential projects, and a rating system regarding our nightly Manna family dinners.
Each Wednesday will feature a "guest blogger" (ie. one of the other Program Directors) to weigh in on issues important to them.  This means you will most likely read a lot about the importance of protecting mangrove forests, be introduced to a number of Jocelyn's famous cake recipes, encounter any number of Economist articles, etc.
Here's to our next year, and let the daily blogging begin!
Holly
Posted by Holland at 5:53 PM No comments: