Finalmente, I have finished the last of our "Interview a PD" series. Let me tell you, it is not very much fun listening to yourself say 'but um' during each question, but um, I got through it!

Please pardon the change of location and the screaming kids in the background (the reason why we changed locations). The neighbors below we're hosing down their buck-naked children to clean them for lice. Oh the joys...

Enjoy the interview; many thanks to everyone who sent questions for all of us PDs! You're all awesome, and we love you.

This week has been filled with 16 person meetings, 1 on 1 programmatic planning sessions, and preparing for tonight's Despedida/Bienvenida in the library. We moved the newbies in a week earlier than usual, cutting their time in Quito to ensure a smooth 2 week transition. We are forced to say goodbye to another two PDs this week, Chet and Mike. But we're also given the opportunity to get to know these new enthusiastic and innovative minds and rest assured knowing that our programs will grow and prosper as we return to the states.

And now, a little introduction to who Chet refers to as the 'new hires.' (this pleasantly disregards the fact that we are not in fact paid employees.) 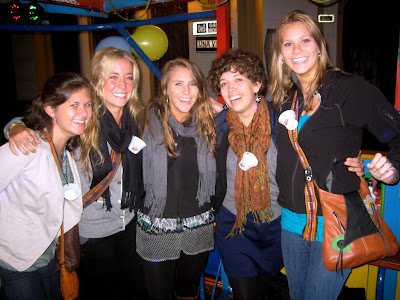 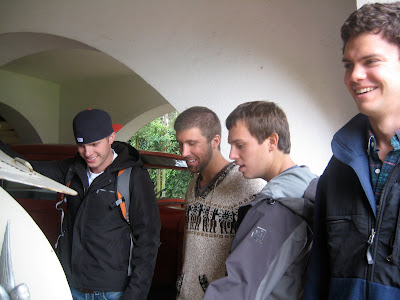 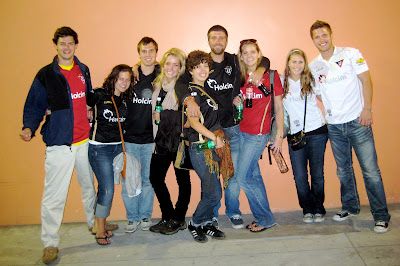 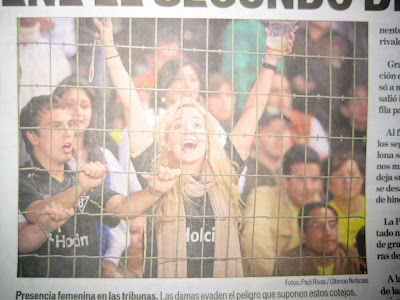 ... and they've already been published in a local paper!

Email ThisBlogThis!Share to TwitterShare to FacebookShare to Pinterest
Labels: newbies

all good things must end

In the past two days we've had to say our first two goodbyes and it certainly hasn't been easy. I'm grateful to have a signed copy of Sarah's cross country poster and a picture of Sonia in my locket to keep me warm at night. We ended our time all together true to form, eating and laughing at each other. Award commissioner Mike hosted this year's (first annual?) democratic PD superlatives, giving out titles like Most Improved Spanish (Chet), Best Glasses (Bibi/Waldo), and Most Entertaining (Haley).

As we close out our time, we still have a few tricks up our sleeves - in the form of guest blogs and an interview of yours truly. So stay posted and don't say goodbye just yet! Without further ado, here is a touching guest blog from KP about her Adult English class:

"As the saying goes, all good things must come to an end. For Adult English, the end sadly came last week. Haley, me and our students ended the course with a blow-out party complete with cake, freshly made hot chocolate with fig tree leaves, candy, cookies, cheese, and without fail, uncooked hot dogs. Yummm! All in all it was a delicious, sugar-high party filled with story telling and bonding.

Each student received an Intermediate English completion certificate and a hug from Haley and me as a special congratulations. Words cannot express how much I loved teaching this class. Not only were they my students, but they became my friends. As I look back on this past year in Ecuador, I can truly say that the personal relationships I have made with my students and the community members in general are what I will always cherish long after I leave. Thinking about leaving this country is extremely hard but I will leave knowing that I aided our students in their pursuit to learning English and that they have impacted my life in ways I will be discovering the rest of my life.

And now, it is my pleasure to present the newest graduates of Intermediate Adult English! 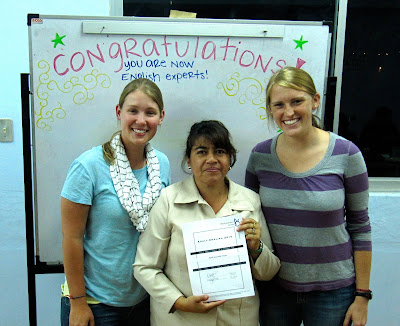 Ruth with Krysta and Haley, showing off her brand new diploma! 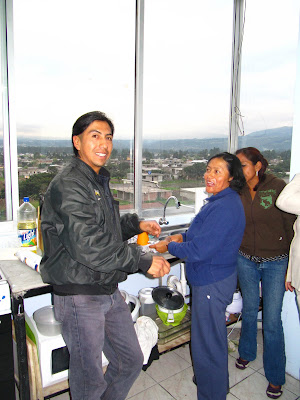 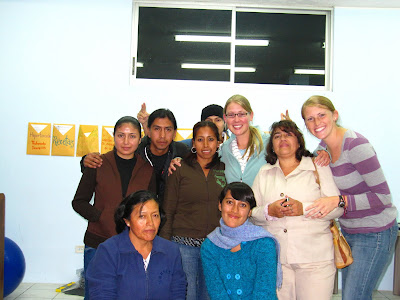 Adult English A, in all of their glory!
- Krysta"
Posted by Jackie at 11:09 AM No comments:

Here it is, PD Interview #8. Eight down, one more to go. Hooray!
And here I am, on my last day in Ecuador. This year has been quite the journey, and although I'm excited to go back to the States, I'm not excited to leave. In the next four days I will be in 3 different worlds - Ecuador, home, and school - and hopefully during that time I'll be able to better process all that this year has meant to me. I'll keep you posted... perhaps with a Guest Blog in the next couple of weeks.
Thank you for reading this blog throughout the last year. Thank you for your comments and e-mails. But most of all, thanks for supporting us.
And here's the interview...
Hasta lluego,
Sarah
PS. Don't mind the permanent squinting... we did my interview on the roof and it was super sunny. :)
Posted by Sarah at 11:15 PM 1 comment:

Time for more interview questions... this time for Jackie, our LAST PD interview of the year.
Question ideas for Jackie could include what it's like to run agriculture/environment programs in Ecuador, her passion for alternate forms of energy, what it's like to be a part of the exclusive apartment-living club, how fun it is to be in charge of composting 9 peoples' worth of food, and more!
Please submit questions via the comments section of this blog post or by e-mailing me (sarah.e.scott.1@gmail.com) before TUESDAY (July 20th) MORNING!
Cheers to our last encounter with iMovie!
Sarah 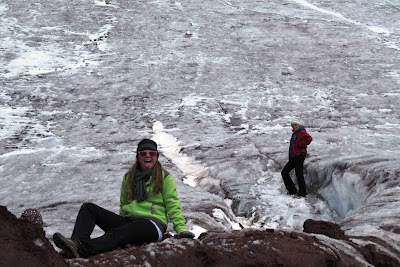 Jackie modeling atop the glacier of Cotopaxi
Posted by Sarah at 10:58 AM No comments:

Welcome to the wonderful world of Sonia Patel! I love this girl to death and I can't even fathom that she will be gone in a week. But, enough sadness for now and onto her interview! Please enjoy, and excuse the rabid dog barking and small children yelling periodically in the background.

We shelved the explosive natural science course back in February; as it turned out, five classes a week in the library is a little overwhelming for kids. But when school got out a few weeks ago and our summer volunteers arrived, we thought the third attempt might be the trick!

We decided to structure the class as follows: one class per week, from 4-6 on Tuesdays, focusing on environmental and agriculture education. Summer volunteers Jen and Mae helped to spearhead the course; although the first class resulted in a bunch of no-shows, their more successful second class was spent learning about the importance of trees and classifying the flora around the cancha, followed by a lesson on gardening at Fundacion Añamisi.

We spent the third class exploring the nature reserve of Pasachoa (that massive mountain that takes up most of the valley's skyline; a few of us climbed it back in January). We traveled to Amaguaña with 14 kids in tow, including Christian, one of our regular teens, Jen Mae, and me. After picking up our naturalist guide, we headed into the park; Mariella gracefully explained the flora and fauna within the park, pointed out crisp and clear streams that slither down from Cotopaxi's glacier, and taught them about the importance of conservation in Ecuador. While we gathered at the entrance, we ran into a reporter for El Commercio, the major newspaper in Quito. She interviewed us about MPI and our work, and we'll be looking out for the weekly edition to see if we made the cut! 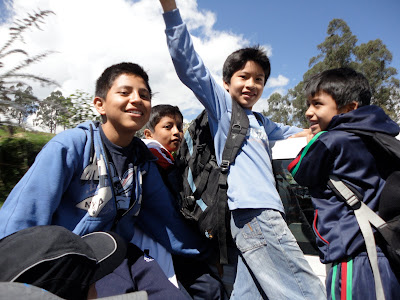 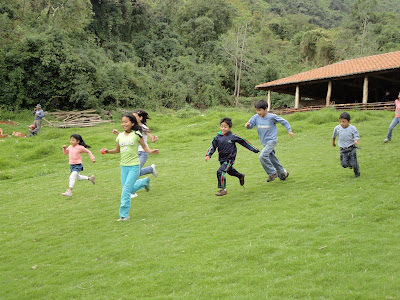 Yes, running up and down a hill 20 times actually IS enjoyable 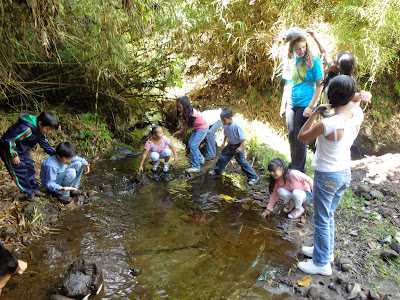 Inspecting the crystal clear waters of the stream 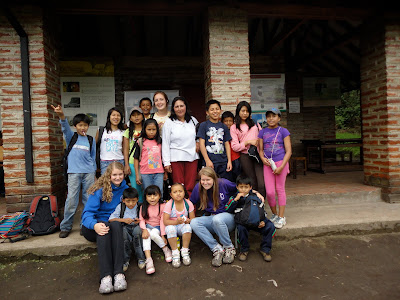 Jen, Mae, Me and our troops

I have really enjoying planning paseos for the kids in the library and I really hope next year's PDs continue to organize them! Note: by next year I actually mean next week; the 2010-2011 E-team is currently in Miami beating Nicaragua, and maybe even Guatemala, at every game possible to keep up our legacy alive...

until next time,
Jackie
Posted by Jackie at 8:30 PM No comments:

The Children's English profes tried out a new attendance reward system during our 12-week course. We said that any student who came to 20 out of 24 classes would go on a super fun paseo at the end of the course. Well. Last week we decided it would be fun to take the kids to the movie theater for a showing of "Toy Story 3"... in Spanish, of course. (We're not mean enough to make the 6 year olds see it in English...)
So today was the day. Seven of the twelve students who earned a pass to the movies met us at the library and we trekked to the San Luis mall from there. They were dressed to the nines, and obviously the boys slicked their hair back with gel. (Excessive gel is cute when you're 8. Not so much when you're 25.) We stocked up on snacks and got to our seats. Some of them were so excited they sat on the very edge of their seats the entire time... and they were laughing hysterically through the entire movie. It was priceless... and refreshing to experience a typical trip to the movies with a group of kids.
Chaoooo,
Sarita 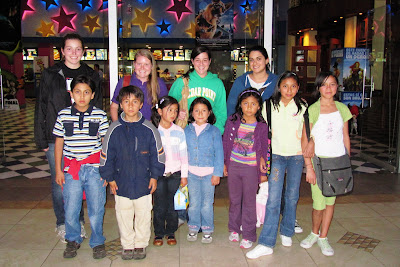 Claire (summer vol), Jackie, Sarah and Shawn with the 7 attendance superstars at the movie
Posted by Sarah at 8:16 PM No comments:

Sarah is leaving us in less than three weeks (tear) to start medical school at Vanderbilt. Please submit any and all questions about healthcare in Ecuador, how much fun it is to run cross-country around the valley, her many teaching talents (from cooking class to teaching the extremely eager beginner's English class), her deep love of reggaeton music, and beyond!

Either send questions by commenting on this blog post, or send them to me, jmw8387@gmail.com. Thanks! 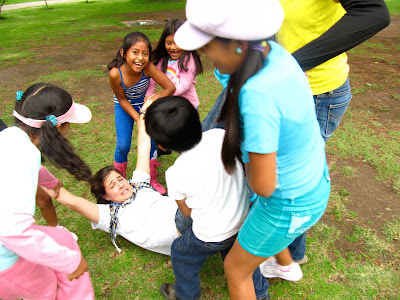 Sarah beyond dominated by a bunch of kids
Have a great 4th of July! We'll be proudly sporting our red, white and blue down here.
- Jackie
Posted by Jackie at 10:39 PM 1 comment:

Good news: Erik's interview is done! Check it out below.
Stay tuned for Sonia's interview... it will be posted sometime next week!
Hasta,
Sarah
Posted by Sarah at 10:36 AM No comments: