This past Saturday bore witness to the second annual Manna Community Celebration in Rumiloma!  Jack spearheaded the planning and execution of a festival on the Plaza Rumiloma, where the central church of Rumiloma is located just a few blocks down from our Centro.  For the week prior, we talked up the celebration to everyone we met who it seemed likely might come: in our library, our classes, even on our beloved Capelo bus route between Sangolquí and Rumiloma.  Following Ecuadorian cues of advertising, Jack and I both on multiple occasions stood up and made announcements and handed out fliers for the festival.  Nerve racking at first, it ended up being a huge rush.
And must have been successful!  Between 150 and 200 people turned up for the celebration that Saturday, children and adults alike.  With Jack emceeing on the DJ’s microphone, we led activities all afternoon, from a water balloon toss to tug of war to an organized game of fútbol.  Folks also bought raffle tickets throughout the afternoon, the prizes for which were a brand new chess set just donated over Christmas, coloring books and new crayons, Manna t-shirts, and Manna water bottles.
In addition to the activities we’d planned, several of our partner organizations actively participated in the afternoon’s events.  Christian and Laura from our agriculture partner, Fundación Añamisi, ran a very successful booth giving out information and selling items from their recently opened small business selling quinoa products.  The Red Cross of Sangolquí sent more than a dozen volunteers to man an information booth and carry out first aid demonstrations in their ambulance, as well as to run face painting.  (As it turned out, the ambulance was put to practical use as well when a girl fell and got a nose bleed and Ashley rolled her ankle when she skipped into a divot.)  Juan Carlos, the sixth grade teacher with whom we work in the nutrition program at Fundación Aliñambi, even brought and managed a bounce house shaped like a whale.
The afternoon was overall a huge success.  Not only did we have regular library attendees present but also a great many new faces interested in learning about Manna and participating as a community in this celebration.  ¡Viva Rumiloma!
Posted by Noel at 6:47 PM 1 comment:

Email ThisBlogThis!Share to TwitterShare to FacebookShare to Pinterest
Labels: community

Festivities in the New Year!

We have made it to 2011! The months so far have flown by and we are currently looking ahead to Spring Break groups and Summer volunteers. Our return to Ecuador has been a busy one, but not without festivities. We celebrated our first birthday of the new year this past weekend! Noel entered into her 25th year this past Monday. Our fiesta in Quito was one to be remembered, complete with one of Zoe's amazing cards, good food and a Packer's victory (shout out to Brock and Luke). The only downside of the night was the Ravens' loss which was quickly forgotten after good food and time spent with even better company. 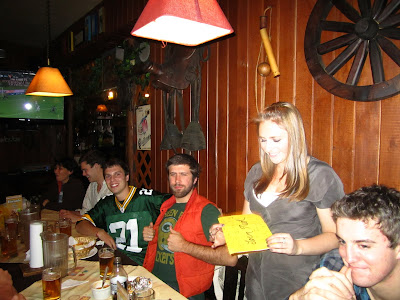 Zoe presenting her work of art to Noel. It's beautiful! 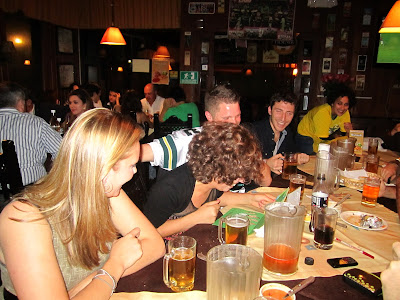 Noel enjoying her personalized birthday card complete with the score of Happy Birthday on the front. 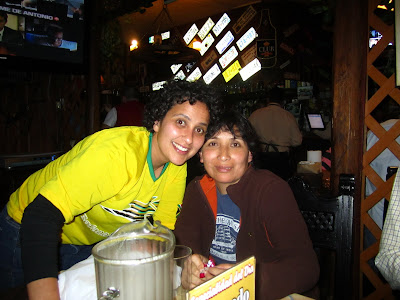 Bibi and Lucia out way past their bedtime to celebrate at Hunter's. 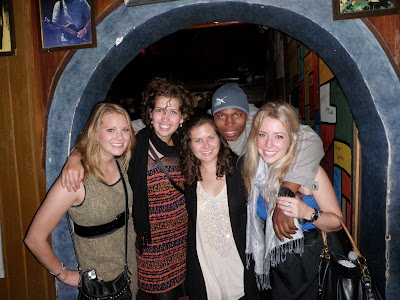 
I would like to wish Noel (my partner in crime on the blog, and in Ecuadorian life) all the best on her 24th birthday. I hope that this 25th year is filled with nothing but happiness, success and love.


Until next time
Besos Chao Chao
Posted by Hannah at 10:55 AM No comments:

Email ThisBlogThis!Share to TwitterShare to FacebookShare to Pinterest
Labels: birthdays

Our first guest blog of 2011 comes from Zoë, with news on our Nutrition program.  Aliñambi, the school in which we work, does not allow us to take pictures of their students, so please forgive the lack of photos for this week’s blog!

Hello blog-readers! Thank you for coming back to us after our break for the holidays. Most of us traveled back to the U.S. to visit our respective hometowns for Christmas and New Year’s Eve. While the three-week break was much enjoyed by all, we are excited to be back to work.
One of the most thrilling parts of being back in the community is that the Nutrition program is now being fully implemented. Becky, Noel, Brock, Luke and I are all part of the Nutrition team, and we are all excited to bring the nutrition charlas and cooking class to the Nutrition program starting this month.  Charlas are essentially informational talks or lectures.  Up until December, the Nutrition program was just made up of the garden, which Becky blogged about a few months back. Now the garden has made excellent progress and the whole program is growing along with it!
Every week, Noel, Becky and I present a charla to the 6th graders at Aliñambi school. We will be covering topics such as why nutrition is important, the food pyramid, micro- and macronutrients, and different types of Ecuadorian products. Using these concepts as well as some of the crops from the garden, Becky and I teach the students how to prepare a healthy dish using economical and accessible Ecuadorian ingredients. All of the recipes have been provided to us by María Luisa, the wife of the Principal of Aliñambi—so she could be sure to include culturally appropriate ingredients.
Today was our first cooking class. We prepared a mixture of rice and quinoa with a topping of swiss chard. We also prepared steamed vegetables with garlic and Naranjilla juice. It ran smoothly, but I do have to admit that the children are going to have to acquire a taste for certain ingredients- such as the Swiss chard María Luisa included in the recipe for today. When I asked one student if he wanted more, he shook his head in an absolute panic! Juan Carlos, their teacher, was threatening extra homework to the last one to finish their food.
Despite the somewhat unfamiliar tastes, all in all, the students really enjoyed being in the kitchen. Many of them help their mothers cook at home, and were teaching Becky and I new kitchen tricks. For example, one girl told me to soak the onion before I started cutting it so it wouldn’t hurt my eyes as much.
We have been preparing and planning the curriculum for Nutrition since about September, and so we are all eager to get it off the ground. Thanks for tuning in!
Posted by Noel at 9:51 PM No comments:

Yesterday saw the beginning of 2011 for MPI, complete with a morning meeting to debrief each other on our holidays as well as to prepare for the opening days of our new quarter.
At the start of break, five of us flew to Peru to hike the Inca Trail to Machu Picchu, a trip Zoë (thank you!!) began planning in August.  Zoë, Becky, Jack, Ashley and I, joined by Zoë’s brother Zach and Hudson from MPI Guatemala, spent what we agreed were some of the most physically challenging days of our lives hiking 45 kilometers up and down 2000 meters through the Peruvian Andes to arrive at Machu Picchu.
After Peru, everyone (including Bibi) traveled home to the States.  Except me.  Although I was sad to miss out on the Taco Bell and Chipotle everyone got to partake in over break, it was cool to spend the holidays here in Ecuador.  My family came and spent Christmas with me and saw our house in Sangolquí and our centro in Rumiloma.  We also spent several days in the jungle, which was fantastic.  After coming back to Quito, they left for the airport with somewhat unfortunate timing around 8pm on New Year’s Eve, but not too soon to see a bit of the Año Viejo in Ecuador.  Avenida Amazonas in la Mariscal was as early as the morning of New Year’s Eve blocked off from traffic and lined with monigotes, or “años viejos”: effigies of people in the Ecuadorian public eye, often political.  At midnight, the creators of the años viejos burn their monigotes, symbolizing the death of all that was undesirable about the year that’s ending and the beginning of a new year, one that will hopefully bring good to replace the bad that has now left.  It was quite a sight.
To return to the present day and MPI Ecuador’s work initiating 2011, the major change we are undertaking in the new year is one in our schedule.  In an effort to respond to requests within our community in the past, we are shifting our work week from a traditional Monday-Friday to Tuesday-Saturday.  People frequently ask us if our library is open on Saturdays or if we offer English classes Saturdays rather than during the week, and we have always had to say no.  But now we begin a grand experiment in which we can say YES to such questions!
Our first Thursday, Friday and Saturday back to work, we are doing a great deal of promoting in Rumiloma and its surrounding communities of San Francisco, Tena, Chaupitena, Santa Isabela, and Fajardo to advertise the new schedule for the library and our classes.  The revised weekly schedule will look like this:
Library hours: Tuesday-Friday 2:30-7pm; Saturday 9am-1pm
Teen Center hours: Tuesday-Friday 4-7pm; Saturday 10am-1pm
Adult English: Wednesday 6-7pm; Saturday 9am-12pm
Children’s English: Tuesday/Thursday 4-5pm
Children’s Art: Friday 4-5pm
Women’s Exercise: Tuesday/Thursday 6-7pm; Wednesday 8-9am; Friday/Saturday 9-10am
Cooking: Saturday 10:30am-12pm
Guitar lessons (individual): Tuesday 2:30-5pm
We start taking inscriptions for this quarter’s classes Tuesday.  We hope that the inclusion of Saturdays in our schedule will allow us to reach an entirely new segment of the community that has been unable to participate in Manna activities before now.  Here’s hoping for positive change in the new year!
Posted by Noel at 10:37 PM No comments: