(And now, a weekend recap by Dunc, who while typing remembered the day old llapingachos in his backpack...good thing he decided to write a blog today, or who knows how long those cheese potatoes would have spent molding in the dark!) 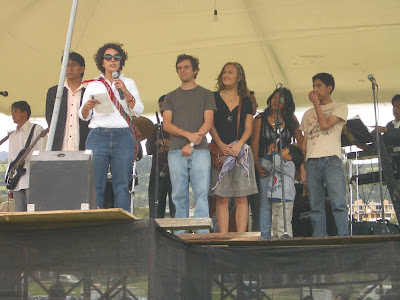 Yes, those were my immediate thoughts when Seth announced that we had all been invited to speak at the Inti-Raymi (Quichua for “Festival of the Sun”) in one of the biggest towns in the valley. Magnifying my fears was the fact that Bibi, Holly, and I would be the only ones in town over the festival weekend due to the Amazonian rainforest excursions and glacier-capped mountain climbing adventures of all our other fellow PDs.

Luckily, we were able to round up of a few of our community friends to go with us, including 4-year old Iori, his mother Paola, and 16-year old Christian. While Holly and I occupied the bouncing Iori on the trip up to the festival, Bibi spent a good half-hour convincing Paola and Christian to talk on stage about their experiences as committed library patrons and teen center members, respectively. As we neared the festival, located in a large field nestled amongst the nearby mountains, however, Paola and Christian’s minds began to change. Along with the dancers in traditional indigenous attire, musicians, and food vendors (mmMMM Ecuadorian llapingachos!) came people. And more people. And even more. 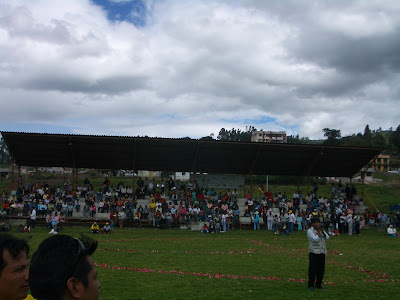 (One side of the pentagon of people)

All in all a couple thousand people were in attendance, enough that when we were quickly ushered towards the stage as the dancers ended their performance, Christian and Paola suddenly declared they not only didn’t want speaking roles, but didn’t even want to go on stage! We luckily managed a compromise, and they joined us on stage while agreeing that Bibi would do all the talking. Fortunately, Bibi did a great job calming her own nerves and gave an excellent outline of our programs and services at the library to the suddenly rapt audience. 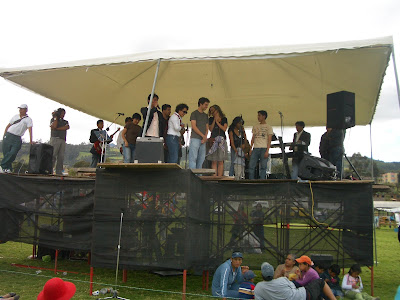 After exiting the stage and before I could make a beeline for the llapingachos, we were all swarmed by people interested about our programs. In just a few minutes, we gave out more than 200 fliers and offered even more details about MPI. Before heading home for the day, I was finally able to make my way to my long-awaited (like 30 minutes!) snack. The food in my belly just amplified the satisfaction I felt about the afternoon. We strengthened our bond with several of our best community friends, advertised our programs to a large number of people in a new neighborhood, and Holly and I successfully avoided testing our Spanish in front of several thousand Ecuadorians. I guess in situations like these it really pays off to be a Program Director rather than a Country Director…

Dunc, the real key is just to look out and imagine that everyone around you is naked -- I mean, I do that anyways and I don't even ever have to speak in public.