Tonight's guest blog comes from Miss Krysta Peterson, fellow natural science profe and my traveling companion for the next week. Since you already know how fabulous she is, I'll let her blog do most of the talking:
"A our natural science class sadly came to end this week, we decided we want to go out with a bang…. or rather an EXPLOSION!

Our 2-part class on volcanoes had a suspenseful start with a volcano diagram and learning, in Spanish AND English, about the various parts of a volcano. Then we swiftly transitioned into our lecture for the day with material stopping just short of discussing plate tectonics, but none the less just as invigorating! We had planned to do a worksheet and show a video but due to the awesome power outages, neither of those caught a glimpse of action on Volcanoes Day one. We ended day one with the actual building of the volcanoes! WOOHOO! Since our class is so large, we split them up into 2 groups allowing each group to make their own paper mache volcano. And naturally without fail they teamed up into boys and girls teams. As day one came to a close the volcanoes were taking shape and looked awesome!

Cotopaxi is one of Ecuador’s more famous volcanoes with its spectacular summit peeking over mountains and clouds providing views from all around Quito. Did you know that Cotopaxi has erupted 50 times since 1738?! If you were in our class Friday, you would have learned this! NO WAY! Yes way...

After some English vocabulary review, a Discovery Channel video about volcanoes, a worksheet and a lesson about the effects of volcanoes on the environment, the time had come…Explosion time! Needless to say they were a huge hit, I mean what kid doesn’t love volcano eruption day in elementary school? So, I’ll let the video and pictures do the talking from here…. 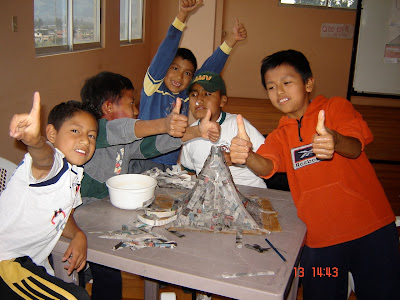 The boys enjoying constructing (and sticking newspaper up their noses) 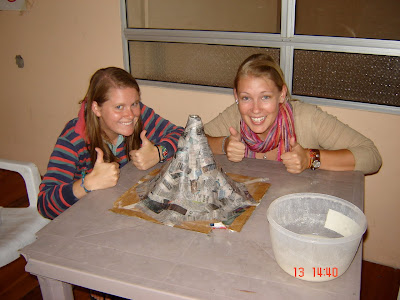 Jackie and Krysta (and more thumbs up) 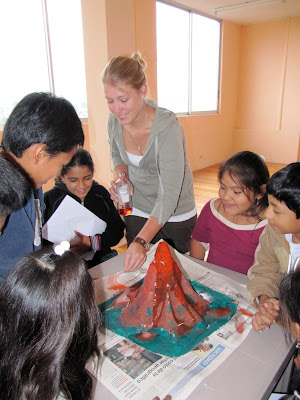 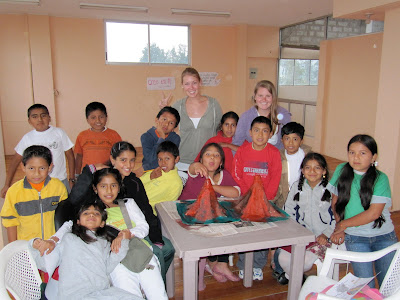 Our whole class!
And FINALLY, our epic video explosion:

If you are just beside yourself with excitement and jealousy that you didn’t get to build a volcano with us, we offer free Skype dates so you too can learn how to bring the fun to your home! (*Materials not included.)

Thanks for reading and have a splendid Thanksgiving week!

Hugs and an Ecuadorian side kiss,

Did you also know that Cotopaxi erupts every 100 years or so in a reaction that would cover San Luis Shopping in 20 feet of volcanic sludge? And that it's 40 years overdue? Stay on your toes, Manna house.

that is the cutest freaking thing ever! 'otro profe, otro otro!' bummed i couldnt be there but thrilled it was a success. love you guys.

i love the videos that y'all put up!!! it's so great to see the kids again :)