Since Dana spent 3 months in Tsuraku last summer, complete with travels all over the country, at first it was a little difficult to think about where we could take her that was new and exciting. Luckily, we had been discussing climbing Pasachoa since before break and found some friends to guide us. We couldn't believe that after a mere 4 days at 2,800 meters (9,189 feet) in the valley, Dana easily conquered another 900 meters in the form of two peaks at the top of Volcan Pasochoa, the breathtaking mountain most clearly visible of those that surround the valley. Other weekend activities included the continuation of the boys' playoff saga (only 3 games left!), a Manna meal in Quito, and cuddling up on couches to avoid a late Sunday afternoon rainstorm. 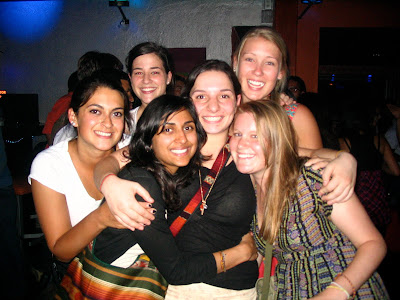 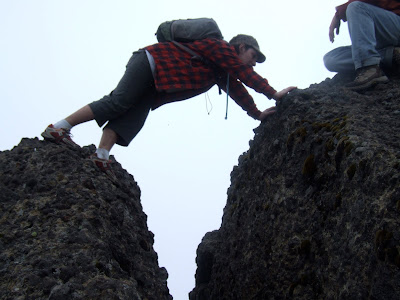 Dana leaping between boulders on Pasochoa 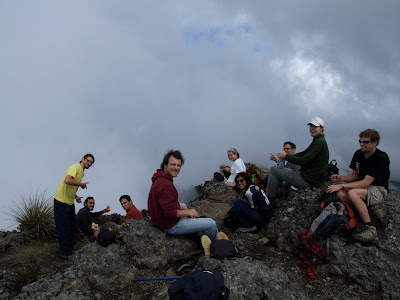 Group shot at the summit before the hail storm started

Lucky duck Dana got to sit in on one of our longer-than-usual MMMs, which was partially spent trying to convince Bibi that we thought it was a good idea to invest $4,000 in an Azblan bus for sale in front of the library. After taking us seriously for about ten minutes, we all burst out laughing, and she responded with something like "I was thinking you've all been here far too long to suggest such an absurd idea." Which reminds me... TOMORROW marks the halfway point of our 13 months in Ecuador! Pretty exciting and crazy how fast time has flown, but I have a sneaky feeling the next 6.5 will be even more of a whirlwind (ie: we're already taking spring break inventory).

For now we're enjoying the end of (or at least a break from) the rainy season, looking forward to a bonfire celebration tomorrow and attempting to stream the State of the Union Address on Wednesday (cross your fingers for us!)