A Taste of Heaven

This week's guest blog comes from Erik Swanson, my apartment-mate until next week when we migrate to the house for spring break - something tells me we might have a little adjusting to do after months of seclusion. After spending Carnaval on the coast, Erik has a lot to say about the beautiful beaches and people he encountered!

"Forty-five years ago, as the story is told, a group of surfers set out to travel the Ecuadorian coast in search of the perfect wave. When they found their ideal wave, they brought their families to a place that is now known as Ayampe to live in tranquility. Never straying from its roots of relaxation and moderate isolation, it is currently a town of no more than 400 easy-going inhabitants. The marriage of its climate, landscape, and culture make it nothing short of breathtaking. When one takes into account the addition of its surf, this small town may, perhaps, appear to be an outpost of heaven on Earth.

The town is small and charming, with its only paved road being the highway that runs from North to South along the coast. There are many small restaurants in the area that serve incredible seafood brought in fresh from the sea and even a small pool hall along the main road of town. Travelers can expect to be greeted with smiles and welcoming locals during the day and to be lulled to sleep by the soft chirping of insects accompanied by the constantly rolling waves at night.

Upon examining the beach itself, one can expect to be struck by all of the magnificent features that contributed to a group of surfers deciding to make it their private paradise. Surrounded by the last tropical forest in Ecuador, not to be confused with the rain forests of the east, and dissected by a river, this small strip of coast is a testament to Ecuador’s natural beauty. Adding to the ambiance of picturesque isolation, the beach’s northern and southern extremities are clearly marked by enormous, impassable rock faces. Completing the scenery, there is a small island formed by two pillars rising almost 100 feet above the waves located due west of the center of the beach. Once a year, the forces that be bless the locals with a stunning sunset that falls directly between the two pillars. 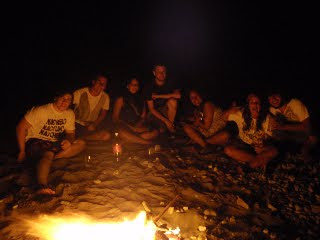 Erik takes a shot of friends at a beach-side bonfire
I had the pleasure of spending the four days of the Carnaval weekend in Ayampe. During a weekend that, at least in Latin America, is typically marked by the over-consumption of alcohol and onsets of temporary madness, I had the pleasure of a weekend filled with sun, surfing, and the company of good friends. My main suggestion for anyone with interest in visiting Ayampe is to bring multiple good books. I’d like to thank Kurt Vonnegut and Jean-Paul Sartre for fulfilling my every literary want and need. "
Posted by Jackie at 8:33 PM

Erik, Thanks for the florid prose. Ayampe truly sounds like a slice of paradise. Mom