Kudos to this week's guest blogger, miss Shawn Fagan, who completed the task of writing us an entry during the week of all madness before spring break gets here! That's right folks, we have just finished the (last minute) preparations for our first group from Vanderbilt to arrive tomorrow. Even Bibi came over, eager to help us clean the kitchen, but really ended up just whipping us with rolled up towels for 45 minutes. As we enjoy a 'quiet' last night in the house, I hope you enjoy Shawn's entry, and look forward to Mike's interview for tomorrow!

"Yesterday I added a new objective to my lists of goals and objectives for this quarter. This objective is to be accomplished by the end of my stay, rather than March 31st, the official end of our third quarter. My new objective struck suddenly; like a beacon of light, it was so clear, so obvious, so logical…how had I not thought of it before? Allow me to explain how this wondrous occurrence played itself out on an otherwise insignificant Wednesday.

I was walking home from the bus stop, excited to test out the new DVD store that had opened up just a block from our house. I was seeking a scary, perhaps funny movie to show at this Friday’s “Noche de Cine” in our Teen Center. The movie I had in mind was “Zombieland,” which, for all of you zombie movie/book/legend lovers (a fan base that includes most of Manna’s 2008-2009 Program Directors), successfully combines gore with humor, romance with dead bodies, and features a fantastic cameo by Bill Murray. Upon entering the intriguing new DVD store, I was slightly dismayed to discover that the window display is pretty much the entire collection. Regardless, I took a look around. Lo and behold they did have “Zombieland,” but only in English with Spanish subtitles. We make it a practice during movie nights to watch movies that are dubbed in Spanish; the teens are typically less than thrilled about the prospect of having to read subtitles, and the Profes always benefit from listening to the cookie-cutter-accented Spanish that is used in film dubbing here.

I began to look around for a different scary/humorous movie. My eyes perused the shelves. In ninth grade, before the age of DVDs, when the neighborhood indie video store reined supreme, my friend and I went through a semi-pretentious phase where we would watch only Kevin Smith movies and then feign an understanding of all the jokes. So when when my gaze fell upon that classic "Mallrats" cover art, I knew it was more than just chance. I rushed home and popped in one of my favorite movies from those long-lost high school years. It was just as good, if not better than I remember, in part because I definitely get a whole lot more now. And then came the revelation that had always been there, just below the surface, waiting to be unveiled. I will, as of my official end of July objective, seek to recreate my golden collection of VHS movies, those that still hold a permanent place on my TV stand at home, in bootleg $1.50 Ecuadorian DVDs. A lofty goal, I know you're all thinking, but it's a noble cuase, and I must persevere. 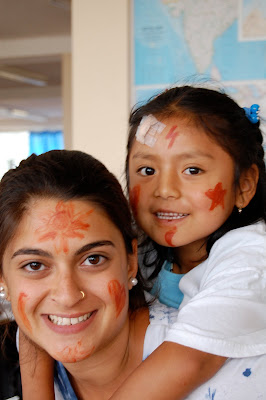 Shawn- I LOVE your new life goal and wish that I had been so enlightened when I still had the chance! Movies are the most ridiculous thing- Blockbusters charges more than $1.50 to take a DVD home for ONE NIGHT! Locaso de leyf.