Time flies when you're with Tulane

We rang in the first week of April with an enthustiastic group of spring breakers from New Orleans (hence the neglecting of the blog). I could go on and on about how delightful and hardworking they were, but I'll leave the explaining to their co-group leader, Sonia...

"As I sit down pondering my time spent with Tulane, a few adjectives come to mind: eventful, gleeful, and priceless. Here’s why - we spent mornings sightseeing Quito and afternoons rotating through programs. We learned of Karington’s slight narcolepsy and how to eat the peels of kiwis. We saw that money can magically disappear and reappear in underwear and we admired the result of Tulane’s artistic abilities, a spectacular mural on a wall in the library. Let’s start at the beginning...

The week started off Saturday night at the airport. I was worried that we might not find them until a group walked through customs door clothed in Tulane attire with pillows and suitcases much too large for a week. After we accounted for the 10 of them maybe 100 times (don’t worry, my paranoia eased off as the week continued), we all cozied up in a snug busetta, so snug that I was sitting on Shawn’s lap. The other program directors were waiting for us at the house. What started off as a brief introduction ended in words of wisdom about toilet paper disposal etiquette. 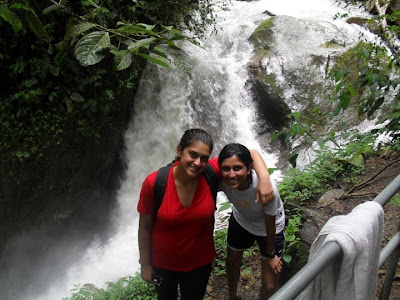 Co-leaders Shawn and Sonia pose at the waterfalls in Mindo

The next morning we embarked for an afternoon soccer game in Quito (LDU, the house’s chosen club team versus El Nacional). On their first day, Tulaners had to face some of Ecuador’s fullest buses. They quickly learned how to maintain their balance with elbows sticking into them and little to hold onto. They ate hot dogs, bought jerseys, and sung LDU to its victory.

That Sunday night after a brief orientation, team Tulane and team Program Directors battled it out over Catch Phrase. Although Tulane lost 1-2, they put up a close fight considering that the program directors had 3.5 hours of practice time the night before.

At day 1.5 I was already in love with Tulane. Their relaxed attitudes and humorous comments made time fly. Here is my attempt to mimic how quickly it felt: we climbed the Basilica, toured colonial Old Town, visited the Guayasamin Museum, and shopped at the Artisan Market. Although it sounds like a lot of sightseeing for one week, Tulane worked as hard as they played. They leveled all of the teen books for a summer reading club; painted two rooms and two bookshelves; cleaned the Centro; and painted an unbelievable mural of Ecuador on one the library’s walls. They did this while cooking and rotating through programs: women’s exercise, children and adult English, the library, and teen center.

Eventful, right? To take a breather, we left for the cloud forest town of Mindo. There we indulged in the country’s best brownies, tasted Fanesca, the grainy soup of Semana Santa (holy week), and went zip-lining, tubing, hiking, and sliding.

The highlight of the trip was without a doubt the night the 13 of us trotted into an empty karaoke bar. Completely American (and completely un-Ecuadorian), they sang pop songs in English (usually Spanish ballads), stood in front of the room (typically seated), and danced. Twenty minutes later the bar was filled but because our teetotalism wasn't profitable enough, the owner kicked us out.

Come Sunday morning, we found ourselves once again in a snug busetta. This time not leaving but going to the airport. Seven days later much had changed. Not only did alpaca attire and Ecuadorian purses/duffle bags fill the busette but so did the exciting yet sad feeling that occurs when new friends part. 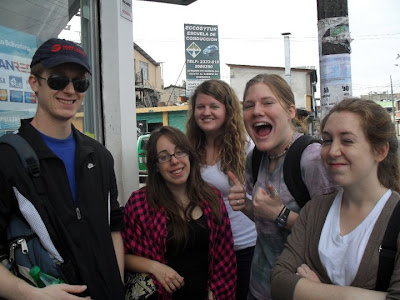 Jordan, Jess, Katherine, Lauren, and Rose out in Conocoto 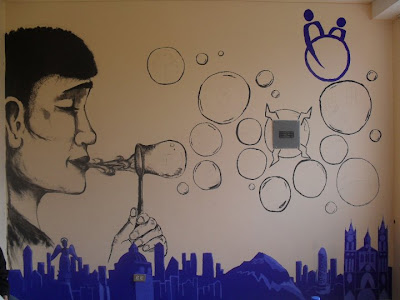 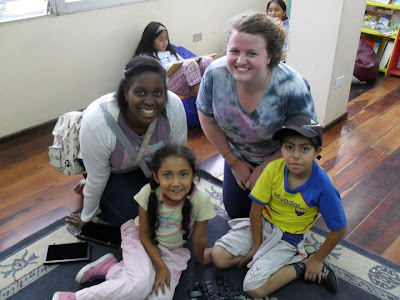 Karrington and Katherine play dominos with some children's English kids 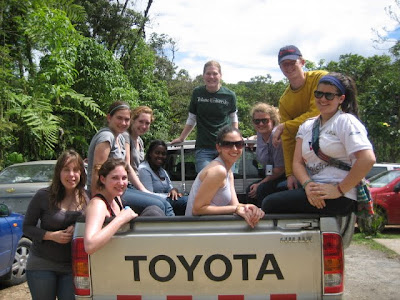 The whole group in a camioneta in Mindo

I couldn’t have asked for a better group of individuals and I hope they take away as memories from our week together as I did.

aww Sonia this is precious! we had an amazing week and miss you ALL! <3