While the month of November brings colder weather and the beginning of the holiday season for everyone Stateside, the new month heralds the arrival of a different holiday for Ecuadorians. While the temperature remains a perfect 65 to 70 degrees most days, many Ecuadorians have been busy making plans for what to do with a four- (or more-) day weekend in honor of Día de los Difuntos, which was officially celebrated November 2nd. Similar to Day of the Dead in Mexico, el Día de los Difuntos honors the souls of family members who have passed away with a celebration of cooking and graveside remembrance. At the Manna house, we were fortunate to enjoy two particular Ecuadorian traditions: colada morada, a hearty drink made from berries similar to blueberries, and guagua de pan, which are baked creations shaped like children. Check out pictures below that Heather posted from the Manna house get-together.

Aside from sampling cultural fare and learning about Ecuadorian traditions, the four-day weekend provided the opportunity for PDs to travel and explore Ecuador. One group of PDs, including Emily, Charlie, and country director Darcy made a long trip to the Amazon rainforest in “el oriente” to see its exotic biodiversity. Another group of PDs, including Watkins, Heather, Nicole, and Rachel, chose to stay behind and explore places near Sangolquí. With the accompaniment and guidance of a couple of our adult English students, we discovered a former lime mine in the heart of traditional Quechua land and also hiked to “la gran cascada” of Rio Pita, which is the highest waterfall in Ecuador. 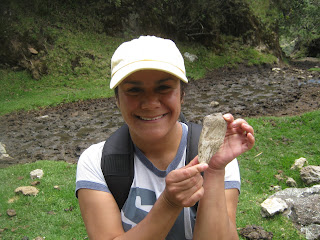 On the first day of the Sangolquí-based adventurers’ vacation, the group of PDs accompanied English student Nadia Torres on a work-related trip. Nadia works as a photographer and journalist, and is helping write a book about the history of Sangolquí. Our trip began with a bus ride along dirt roads to a small town called Tolóntag, near where we hoped to find a mine from which lime (cal) was taken that was used in the construction of the plaza of Sangolquí. Nadia, being a journalist, procured us permission to visit the mine and some general directions from the town’s mayor. While Nadia worked her magic, the PDs made friends with some locals and were gifted with maqueños, a kind of plantain with a reddish peel and peach-colored fruit. In our casual conversation, we were told that children from Tolóntag traveled an hour each way to school every day. We also noticed that the Spanish spoken in this small town differed markedly in pronunciation from what we’re used to, a difference Nadia attributed to the Quechua tradition. 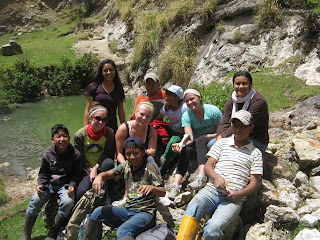 With permission, vague directions, and a hired camioneta (pick-up truck), we embarked down a rocky road until the driver bade us farewell and we began walking. We enjoyed good views of hills and volcanoes, and after a while encountered a family working a field of crops near the road. After pleasantries, the adults had their children guide us to the site of the former mine, where we had lunch and took pictures, and laughed at our guides’ antics. The kids were intrigued by our accents and happily showed us the former mine, which is now a thermal pool of water, and other sites near their farm. We ended our trip that day by returning to Sangolquí and having ice cream at an heladería next to the plaza of Sangolquí. 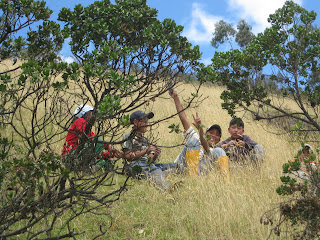 The next day, the PDs piled into a truck with another friend and English student, Ivo Vaca, and drove down a bumpy road to the path toward “La Gran Cascada” of Rio Pita. The hour-and-a-half walk through a gorge alongside the river Rio Pita was marked by smaller waterfalls, jumping-off points for swimmers, and untypically lush vegetation. Due to the water’s freezing temperature, we did not do very much swimming, and instead admired the views of the river and waterfall. We were thankful to find near our house such interesting places as the waterfall and abandoned mine from the day before, and to be in the authentic company of Ecuadorian families on vacation. For all the PDs on Team Ecuador, the holiday was a welcome break and a chance to learn more about Ecuador. 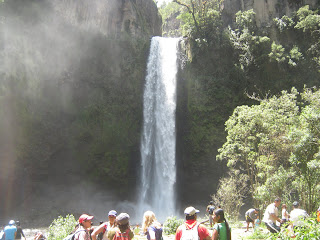