The Festival and The (sorta) Bullfight

The usually sleepy town we live in, Sangolqui, was thriving over the weekend for the annual maize and tourism festival. Those two themes don't really appear to go hand in hand but they're the two biggest means of revenue in the region so it's only right to celebrate them together. A group of us woke up early on Saturday morning to hand out flyers advertising our classes that start next Tuesday. We handed out 300 flyers in about thirty minutes so we felt pretty good about ourselves before we settled in to enjoy the parade. While the theme of the parade was the choclo (maize) it was really a show of horse clubs and the bulls that would soon be terrorizing the young, bold, and idiotic men that would be stepping into the arena with the toro. We knew the bullfight would be pretty terrifying to watch, however, none of us were expecting the parade to provide us with a number of scares as well. For every ten calm horses that strode past us, there would be one that was obviously not happy to be there and would rear and generally be impossible to control. We saw on two occasions a horse and rider turn into the crowd, sending the crowds scrambling for safety and on one occasion sending a woman and child flying to the ground. Luckily there were no serious injuries. Those were to come later in the afternoon. 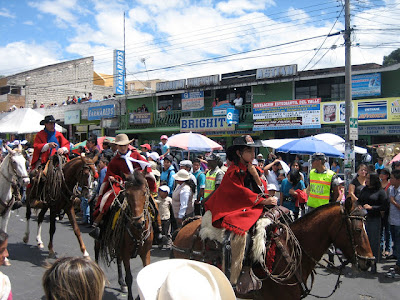 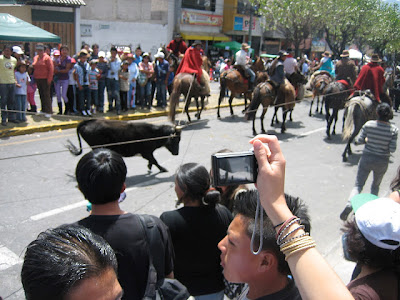 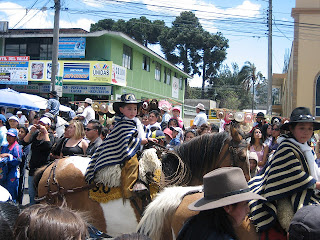 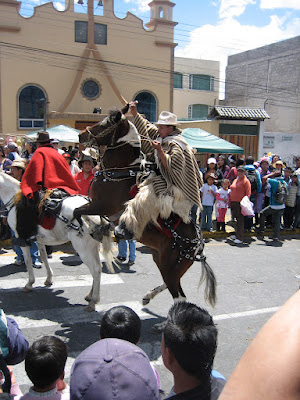 Either a great cowboy or a terrible horse

After a light siesta, the entire group minus animal rights activist in the making Joey, headed to the bullfight. Slowly making our way through crowds that numbered in the thousands, the arena suddenly loomed in front of us and the general feeling of excitement was immediately replaced by adrenaline fueled terror. Peter accurately compared the bullring to the first arena Russell Crowe fights at in the movie Gladiator while Sarah went for the Quidditch world cup comparison. The ring had been built specifically for the event and looked as it had been thrown together over night. It's three stories soared about thirty feet into the air with the ground floor reserved for stores selling beer and street food and beer. The second and third tiers were the viewing boxes. In order to reach the seemingly empty box we chose, we had to climb a shaky ladder to the third floor where we crammed in with around twenty other fans. The initial view was breathtaking. The ring was crammed with anywhere between 50 to 100 people, mostly made up of twenty to thirty something year old men. Only a handful had capes while the rest ran pellmell around the ring daring each other to get closer than they themselves had to the rampaging bull. Some, mostly those with the capes, showed real prowess and finesse that even would have impressed Hemingway. However, the majority were drunken thrill seekers who terrorized the bull by running circles around it and provoked it by throwing rocks and trash at the bewildered beast. After a few docile and confused bulls, the crowd began to get what the had been whistling for. A series of ferociously fast bulls took out a couple of the slower boys in the ring. We saw a few men get tossed in the air, some catching a horn from behind, but the bull didnt pursue them so there were no injuries that were too bad. The worst part of the evening had to be when a horse got caught and the bull was relentless in taking it down. You really have to respect how powerful the animal was when it could toss a full grown horse into the air. It was obvious that it was beyond healing but we were spared seeing the ending of its life by the large group of people that encircled the fallen animal. All in all it was a spectacular event to be a part of and made for a fun and culture packed weekend in Sangolqui. 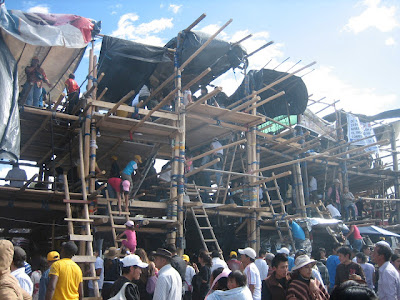 The back entrance to the "boxes" 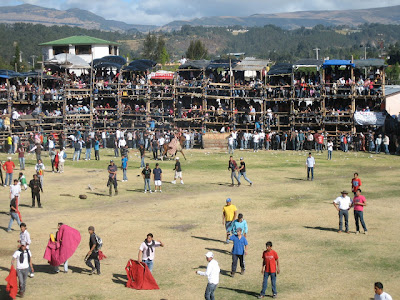 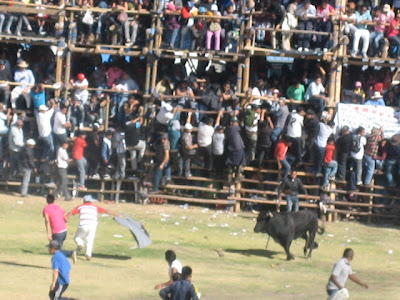 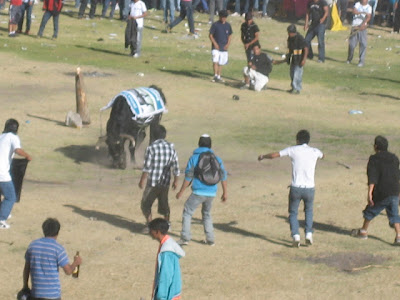 Email ThisBlogThis!Share to TwitterShare to FacebookShare to Pinterest
Labels: culture