Building networks, one beet at a time

(In an effort to add more voices to the mix, we're upping the guest blog frequency, trying for twice a week. Today's comes from Eliah!)

"If credibility is important to securing local buy-in to community development projects—and it is—I often get off to a rocky start here. As one of the two PDs working on Manna Ecuador's soon-to-be-released agricultural education program, I am often asked by the community members and agricultural experts I talk to what it is I grow on my farm. Nothing, I tell them. Actually I don't have a farm. In fact, I don't know very much about agriculture. Interestingly, this almost always produces the same response from the person I'm talking to: a sort of silent, confused nod, not unlike how they might act had I told them I was wearing leopard skin underwear. Reading this, you may be reacting the same way right now. "So what are you doing running an agriculture program?" you might ask. Then again, it could be the leopard skin. Either way, this example is instructive of how many programs at Manna Project work.

As a rule of thumb, we Manna Ecuadorians aren't explicitly qualified for most activities we take part in. This shouldn't be surprising; after all, we don't hold advanced degrees or have years of work experience under our belts. Instead, what we bring to the table is the ability to find the people who are qualified for some task and the community members interested in their expertise and connect them up. So while I may not know whether a lettuce- or grain-based diet makes for the most succulent guinea pig, I know a guy who does, and he'll come out here and tell you for free.

Anyway, that whole credibility thing is still important, so today Dana (the other ag ed PD) and I did some farming. INNFA, a social welfare organization, runs a model farm in Conocoto to teach agricultural techniques to locals. We went there, as always, in the hopes of connecting our community members with expert help—we talked to Julio, INNFA's agricultural engineer, about bringing a group to work at the farm on a weekly basis—but we stayed to rake hay, pull beets, and anything else that kept us away from Juan, the 50-something worker who wanted Dana's number. In the end we were rewarded with a sack of fresh, organic produce and a sense of gratitude that, while we may not know whether to take offense when they ask us to do some hoeing, we can do this job.

So while it could be that our ag ed PD next year is a licensed agronomist and card carrying member of the US Potato Board, and I hope that happens, I'll live through the awkward nods and questioning stares and keep on building the networks that make this program run. Who knows, maybe I'll even learn something along the way. 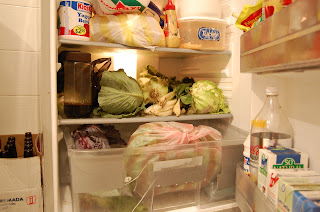 P.S. Watch Proof of Life, it's bad, but it's totally worth it
P.P.S. I spent 8 hours on a bus today and was at 2800msnm and totally thought about you guys

Guten Tag! If you are interested in beets, Schrute Farms is the number one beet-related agrotourism destination in Northeastern Pennsylvania. We offer the finest accommodations for the casual traveler and/or beet enthusiast. Come join us and experience majestic Schrute Farms.