This is the third month we've been partnering with Christian, an up and coming community leader, on conversational classes with his English students. His courses consist of two parts: theoretical instruction and conversation, but as he is a native Ecuadorian, he initially described his conversational classes as problematically "reinforcing poor English pronunciation". Enter Manna Project, which just so happens to be chalk full of native English speakers whose only pronunciation issues surface when certain Texans insist on calling "Jalapeños" "Jaal-op-in-yos" or "Quesadillas" "Ques-a-dillll-ahhs"...ahem Duncan Fulton.

Three times a week, 2 of us head over to Christian's home and attempt to hold purely English conversations with his slightly bewildered students. It is pretty comical hearing one another speaking as articulately and slowly as possible, only to be greeted by the big eyes and partially open mouths of our students. They're all pretty driven to learn, though, and have made some impressive progress since we first met them in November.

This morning marked our first class post-December break, and Jocelyn and I slumped around the kitchen at 6:30am in a daze (we're the lucky ones blessed with the Tuesday 8-10am slot), talking ourselves into the first bus ride of 2009. When we arrived at Christians, there were no students, but there were 4 little piglets to check up on, one mama pig who, according to Christian, "needs a man pig soon", a new type of Ecuadorian beer to try (at 8:30am), to which Christian would not take "no thank you" as an aswer, and English dialogues to write and record onto his computer. Eventually a "man pig" did show up, and a conjugal visit between pigs...happened...while Jos and I tried our best to focus on the dialogue we were writing about Christmas vacation. It was not easy to do.

And just think, all this happened before 10 in the morning. It's going to be a good Tuesday.
Oh Ecuador, how we've missed you. 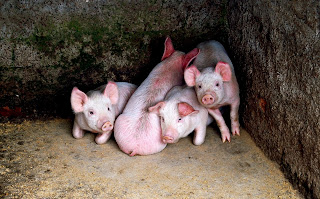 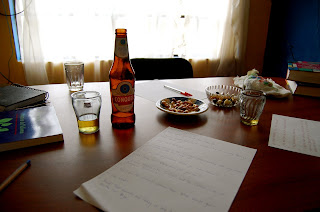 You guys are TOO funny! What does Seth say about pet piggitos?

Wow. What a way to start back to "work." Holly, you find the most interesting things to write about. Can't wait to read more.