(Today's guest blog comes from Dunc Fulton, half of the Texas constituency in the Manna house and Eliah's cuarenta partner, like you needed reminding... Enjoy!)
"One of the great parts about living in geographically diverse Ecuador is the proximity of numerous travel destinations. To enjoy the mountain scenery up-close over the recent holiday weekend of Carnaval, Eliah and I escaped the busy Manna-life to go backpacking down the ancient Inca trail. 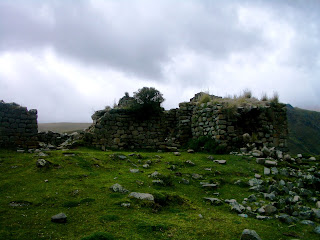 (stop along the Incan trail)
Even though we enjoyed the peaceful mountain hiking, it came to an abrupt end as we were confronted with a strange Ecuadorian tradition on the Monday of Carnaval, when it becomes socially acceptable to throw water balloons at any passing person, whether 7 years old or 70.

After finishing the trail, we rode in the back of a pick-up truck down to civilization. Passing through rural Ecuadorian towns, we were suddenly surprised by the full force of the water balloons. Hit once, twice, three times, we were quickly plastered with more water than we had encountered our entire weekend camping. Using our ponchos for defense, we all became helpless lookouts yelling “bombas, bombas!” whenever more balloons sailed in from nearby houses, passing cars, or roadside kids. 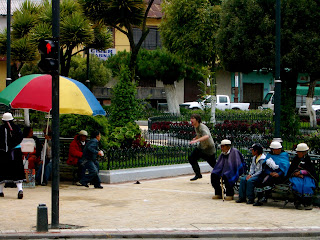 (Eliah chases balloon-toting Ecuadorian children through the town square)
Finally arriving somewhat soaked in the town of El Tambo to wait for our bus, we realized that the madness wasn’t over. The town center was in fact a hotbed of children, teens, and store-keepers armed with water balloon and shaving cream. While most of our group was content to fight back with water bottles or the occasional balloon we managed to catch, Eliah was interested in taking a more assertive stance. By chasing children around the town square, sneak-attacking trucks filled with alert teens, Eliah proved that gringos can hold their own too. Even the crafty shop-owners, who would dart out to spray shaving cream before retreating, found no respite as Eliah would just follow them inside for revenge. 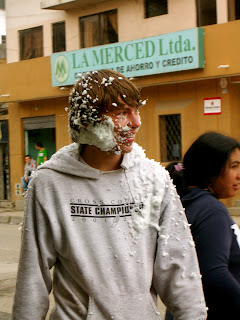 (Eliah and a face full of shaving cream)
Although I felt safer remaining on the defensive than the soaking wet Eliah, I too was forced to learn a lesson. As the bus approached, I smiled, since prolonged attention had allowed me to stay dry. All of a sudden however, I heard a noise above, and looked up to see a bucket of water being poured from the nearby second floor-window, completely engulfing me in water. I guess the gringos went 1-1 that day. 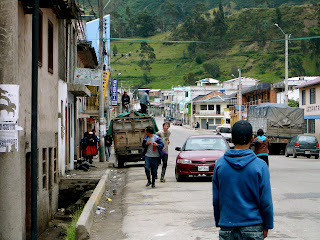 (Dunc and Eliah run away from a truck water-balloon launcher and 2nd story buckets of water)
Dunc"
Posted by Holland at 10:38 AM