Today's guest blog comes from Miss Haley Booe (pronounced like boo, not booey). Haley hails from North Carolina and the hookie-infested Virginia Tech University. She's well known around here for being a Tai Chi enthusiast, enjoying toast, introducing us to Step Up (1 and 2), and having a huge supportive heart. For example if you check out the group Women's Exercise picture below you can catch a glimpse of one of her motivational signs that reads 'believe in yourself, you can do it!'

"Life in the Manna House, as you might have already guessed, is a bit like a circus. It may be due to the fact that once a week there is food in someone’s hair by the end of dinner, but recently, I’m convinced it’s because many of us have been perfecting a balancing act in regard to programs.

My time in Ecuador thus far has been concentrated on the Women’s Exercise program. Recently, we moved locations to the third floor of the library. This was an exciting move for us, because now we have our own space and a chance to further network within the library community. On the other hand, we’ve also been having a difficult time with attendance, and trying to figure out how to boost our numbers. One culprit could be the Ecuadorian fear that all foreigners have swine flu. And since my pale (almost translucent at this point) skin and light hair scream “Gringa,” people might be running in the opposite direction for that reason. As plausible as that theory sounds, I think it’s more likely caused by the fact that the past two months have been a transition period, both in the Manna House and in our Ecuadorian communities. Many people spend August and early September soaking up the last days of summer by taking family vacations and are busy doing what us Spanglish-speaking gringos call matriculando-ing (Spanglish for “matricular” or registering for school). Now that school is back in session, and that we’ve made phone calls to over 70 women who have previously attended exercise classes, attendance is slowly picking up. The women who attend class regularly are great, and I am excited and ready to see this program grow this year.

Aside from learning how to do guided meditation in Spanish for yoga class (apparently a class favorite… who knew?) I’ve recently been helping with lesson planning for English. I am helping Chet teach Adult English on Wednesdays and am starting to help Sarah with Children’s English on Mondays. The nutrition program for Aliñambi also requires some time, as several of us spent mornings going to the school to take growth measurements on each of the students. It’s very exciting to be a part of these different programs, and it’s looking to be a promising year.

Understandably, it takes a bit of juggling and a lot of planning to prepare for and teach many different classes - hence why I often feel like I’m a part of the circus. But then again, it could be that I’m woken up most mornings by the cow (whose grunts more closely resemble those of a dinosaur) that likes to graze outside of our window. Although the chaos of the Manna house and the flexibility required to run programs sometimes resembles a Barnum and Bailey’s three ring stage, Ecuador is becoming my home and I’m thrilled to be a part of a these communities. 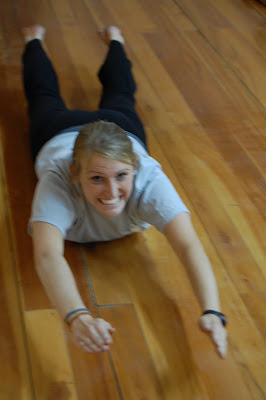 Haley strengthening her core with a smile 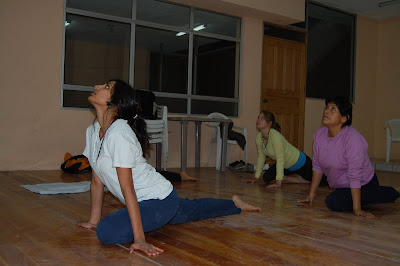 Sonia, me and one of the other women doing yoga 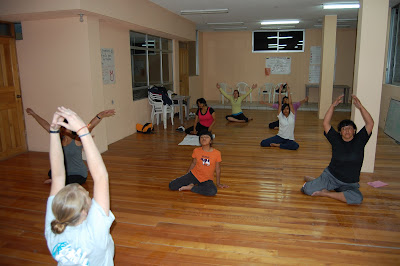 Haley leading us into Meditation 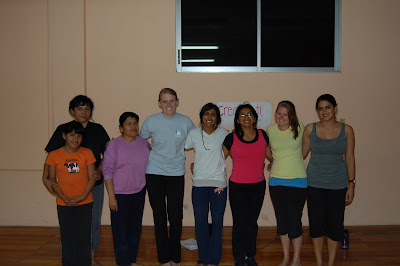 You girls are doing a fabulous job keep all of us informed on what's going on there. I love reading everyday and enjoy seeing the pictures. I just need to keep a spanish-english dictionary next to the computer sometimes. I'm sure ya'll are all thinking in spanish. love to all, Ma ma Duck

It's great to see this program continuing and finally being moved to the library space upstairs! I'm really proud of you girls, keep doing what you're doing :) thanks for the updates, keep them coming!