For those of you wondering what happened to the Wednesday guest blog, don't worry, it's still around...even though it's been mia for the past two weeks. Serena's thinking up her entry as I write this, which is set to appear sometime later today instead of Wednesday. Obviously. Since Wednesday has a blank hole where someone (ok fine, it was me) forgot to put anything.

Anyway! The MPIEcuador house is going to play host to three wonderful Manna Executives (for want of a better term) over the next three weeks, the first of whom arrived late Wednesday night. Lori, the director of Manna Project and one of its original founders flew from Nicaragua to Ecuador via Miami yesterday, which makes about as much sense as the man I saw watering his grass today WHILE IT WAS RAINING, but so it goes down here. She's already gone on a run to the bank in Conocoto, spent some time on the couch in the kitchen (we moved Dunc's bed back up to his room), read a bunch of Dr. Suess books with Maylen at Apoyo, played Go Fish! with Jocelyn's english students, laughed through women's exercise, and watched a movie on the projector. The girl's got a lot ahead of her, considering that was just day one, and we couldn't be more excited to show her around the Ecuadorian life we've built here thus far.

As for our other two guests, Chris and Amira, can't wait for you guys to get here! 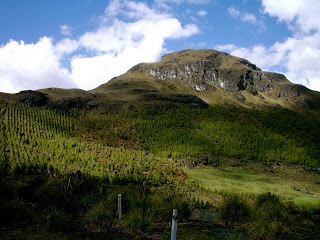 did you take a picture of a christmas tree farm?

LOVED my stay at the manna hotel...we made it back safe and sound although i had to stop a potential fist fight between a drunk guy and a senyora on the plane..never a dull moment :) have a great week!