(Today's guest blog comes from Serena Zhou, who has recently begun teaching us all words in Chinese while lounging on the couch in the kitchen.)

La Doctora (Dra.) dons a pair of surgical gloves, motions me over to the patient bed, and hands me an ancient-looking metal clamp device. The patient, a woman in her 50s (although most women here tend to look a lot older than they are), starts unbuttoning her pants. Meanwhile, I'm holding this monster clamp in my right hand watching this woman willingly reveal her world, feeling my gracious smile beginning to twitch. What have I gotten myself into?

In Ecuador, like in most other countries in the world, high school graduates apply to universities as a medical student. In other words, there is no such thing as "pre-med." To save the confusion in trying to explain this minor discrepancy, I tell the doctors that I'm a 5th year med student (my logic being that I've had 4 years undergrad training as a pre-med, planning to start my 5th year as a medical student-here's hoping!). I'm about to find out just how much "5th year med students" in the US are perceived to know by Ecuadorian doctors...

The clinic where I've been shadowing for the past month functions under the Ministry of Public Heath in Conocoto, and provides free services to its patients who cannot otherwise afford basic health care. I would've walked right past the unlabeled building if it weren't for the locals directing me to it. To be honest, it made the clinics in ghetto downtown Baltimore seem like penthouse suites. But I love it.   Lines as long as those formed in Ohio on Nov. 4, 2008, appear every morning before it opens at 8am. The clinic has 2 nurses and 7 doctors (2 obstetricians, 1 gynecologist, 2 pediatricians, 2 general practitioners), who's showings are as predictable as Ecuadorian weather (that is, very UNpredictable). Over the course of the past few months, I have had the lucky opportunity to do clinical rotations and shadow a different doctor each week.

On my first day (that is, after a few no-shows), I shadowed Dra. Espinoza, an obstetrician. She taught me the word papanicolau, which means "pap smear" and subsequently set me to work. If it weren't for the lack of liability, I think I would have been in some legal trouble. The staff just don't seem to fully grasp the meaning of "no, no todavia he aprendido eso" (no, I have not yet learned that). I've been asked to prescribe medicine despite my broken Spanish (don't worry, I didn't. Not about to build a malpractice track record that will haunt me for years). But I do get to take patients' histories and fill out various medical forms in Spanish, fill out prescription forms (with proper assistance), and perform/record basic clinical procedures (blood pressure, weight, height, temperature). How accurate they are might be another story, seeing how I taught myself how to take blood pressure from a CVS pamphlet. But hey, the nurses seem to trust my measurements over their own. (It must be the white jacket? Or being Asian?   ).

Nonetheless, these experiences have confidently prepared me for medical school in the future, for which I am immensely grateful. I can definitely see myself, and hope to be, working long-term in a clinic that serves underprivileged citizens such as this (apart from the flakiness). However, it did, I have to admit, confirm my interests to not specialize and instead go for primary care...at least over ob-gyn. 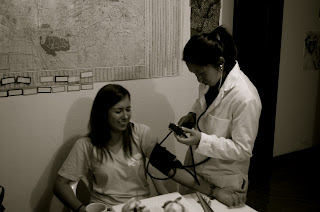 (Jocelyn gets her blood pressure taken by Serena. And tries not to laugh.)
Posted by Holland at 4:41 PM