It's officially September which means that our string of visitors have left, we're now only cooking for 10 (plus dessert for Bibi), and programs begin in t-minus two weeks from yesterday.  Up until now being here felt more or less like summer camp, perhaps because we were running a camp of our own.  However, as August began to slip away and the realization that we wouldn't be going home for another year of school settled in, so did the magnitude of the upcoming twelve months.
One area that is undergoing considerable change is the physical and operational structure of our library.  Last year's PDs worked their tushes off to obtain, set up, and manage the library space, making it a place for community members to interact, play, and most importantly, enjoy reading.   Now that the foundation has been built, it is our job to transform it into a fundamental piece of the community where we work.  Come September 14, we will be running all of our programs out of the library space, from Art to Children's English to Women's Exercise which will be held above the library in a space we just recently began renting.
Mike Gabrys and I are co-managing the library and part of our job is to envision what we want it to look like when we leave next summer.  Though it's tough to imagine life a year from now, it's an important consideration, keeping in mind of course that visions are often different than originally intended.   This type of mentality is necessary for every program that we run here at Manna and it's something we've all been thinking about as we begin to draw up lesson plans and map out other programatic ideas. 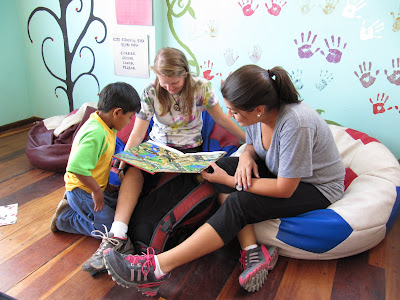 Shawn and I explain the wonders of I Spy
In other news, today was an interesting day for a couple of reasons:
Mike and I took a trip to the mailbox to retrieve a birthday box (thanks Ma!) and to our surprise, a postcard from our dear friend and past PD, Serena!  It appears that she didn't expect said postcard to arrive for several years because in it she introduced herself, explained the programs that she started, and asked us to e-mail her about progress since she left (which was about two weeks ago).  Needless to say, we love you Serena!
There was also a post-dinner incident concerning a handful of girls and a contaminated bowl of pizza dough that contained twice the amount of yeast than the recipe called for.  For more information please see below... 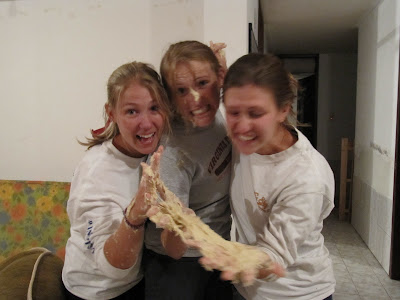 haley what is it with you and food? mmd

look out for a letter from dana with a little card from me.

so jealous by the way--manna looks fabulous