It might sound like these three topics don't mesh well together, but that, in chronological order, is exactly how we spent our weekend.  Mid-afternoon on Saturday we headed to a fundraiser for the church of Rumiloma.  The building had been knocked down sometime last year and the community has been slowly renovating it, but unable to get very far due to lack of funds.  As we walked into the courtyard and found a half dozen tents, a full band on a covered stage, and some of our favorite library kids running up to greet us.  We wandered through the crowd, some of us ordering Cuy while others watched a clown sporting over-sized plastic American flag shoes sing to a woman for her 100th birthday  (and shamelessly point out the ten gringos lingering in the background). 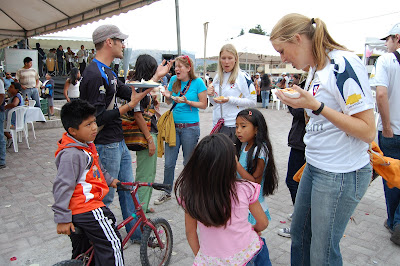 Being greeted by some kids in the community 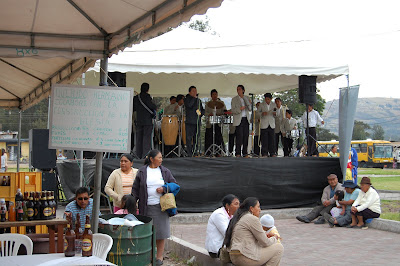 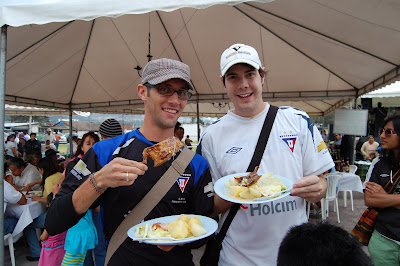 Mike and Chet enjoy their cuy (a.k.a. guinea pig, an Ecuadorian delicacy)
After stuffing ourselves with cuy and chochos we caught a bus into Quito to scalp some futbol tickets.  Although we're accustomed to people hopping on buses and sell everything from Bon Ice to historical dvds (guilty of buying both), the man that hopped on our bus had a talent that most lack.  I'm not sure if it was his thought-provoking riddles or straight up charm, but he somehow convinced at least half of the people on our bus, including Krysta, to buy a family indestructible tiny Snoopy keychains.  How do we know they were destructible, you might ask?  The salesman threw it on the bus floor (lick any of those lately to avoid going to Jersey, Seth?) and stomped all over it to demonstrate. 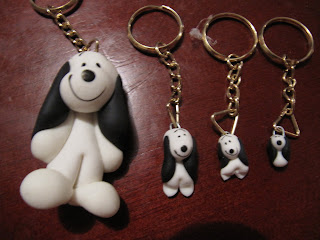 A clan of snoopies... enough said.
The rest of us were happy to spend our allowance on futbol tickets, avoiding the ploys of a Billy Mays in the making.  La Liga Deportiva, the club team we've become partial to, played against el Deportivo de Quito.  Though our team lost 3-0, we thoroughly enjoyed waving around Liga flags and jumping around with the rest of the fans and chanting "esta noche tenemos que ganar!" (at least that's the only part of the cheer I remember). 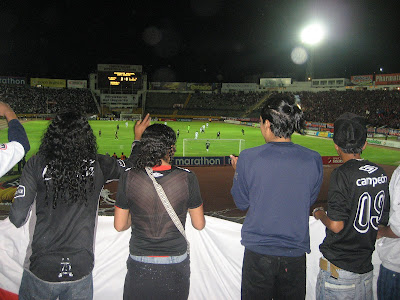 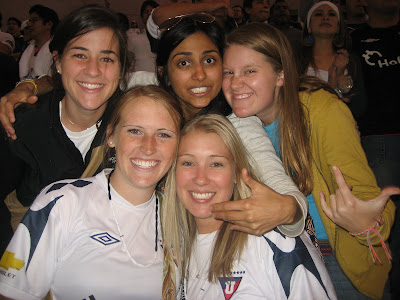 The girls attempt to chime in with the fight songs
Until next time,
Jackie
Posted by Jackie at 4:36 PM

Woohoo! Sounds like such a fun weekend :) Vaya Liga!