Time already for our second guest blog: meet Ashley! Programatically, Ashley will be working with the teen center, women's exercise, children's English, and community liaisons with Manna. Today she's getting us up-to-date on happenings with teens: 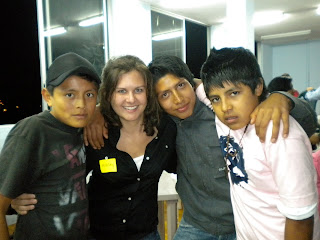 Joseph, Ashley, Juan, and Jasson at the Manna Center

Hi there, I’m Ashley Hanson, a member of the super exciting group of ’10-’11 PDs. I am from Chagrin Falls, Ohio but definitely headed south for school at Vanderbilt (the weather is just so much nicer there), where I majored in Human and Organizational Development. I focused particularly on international and community development, which has led perfectly into our work here in Ecuador.

I have had the privilege of working with the teen center, which has been a complete blast. Some would say that it’s just a bunch of young teenagers playing video games, but it is so much more. Teens begin arriving at the library at 2:30 in order to stand by the desk and point at the clock, anxiously awaiting the opening of the teen center at 4:00. In addition to the beloved video games, we frequently play chess, ping pong, and a plethora of board games. Some of the teens serenade us with their guitar and vocal skills, at times passing along their knowledge so that we can all play together.

During an interview for our upcoming promotional video, one of the teens who recently became acquainted with the centro discussed how important it has been in his life. He explained that the teen center gives the teens a place to hang out, have fun with friends, and stay safe. Before that, at times I’ve questioned that depth of the impact that the teen center has in the community, but he made it clear that it has been integral in his life and in the lives of many of his friends and family. It makes it even more rewarding and encouraging to hear such positive feedback! 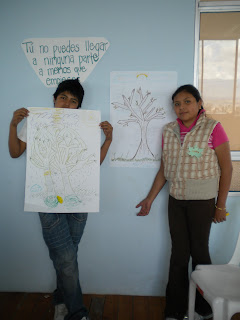 As Hannah mentioned, we have also partnered with the Departamento Nacional de Jóvenes, a section of the Ecuadorian government that deals with children and adolescents. We have held 2 workshops already: the first one focused on discovering identity, and the second exploring teens’ rights and responsibilities. We played games, had discussions, and even incorporated some art. Our final workshop with just our group is this Friday. For our next event, we will meet with a broader group of 2,500 adolescents so that they can collectively work to make an impact using their rights. It is really exciting to be able to work together with the government toward improving the lives and situations of adolescents here in the valley.
Posted by Noel at 9:46 PM