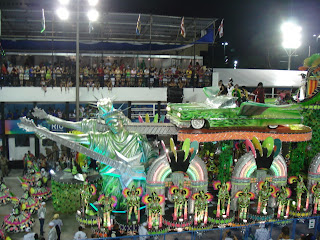 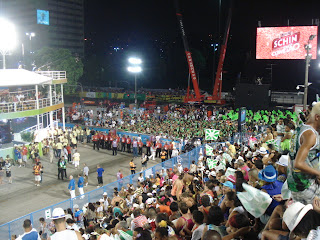 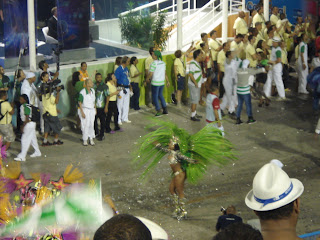 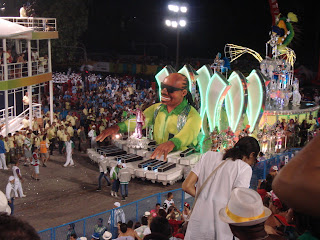 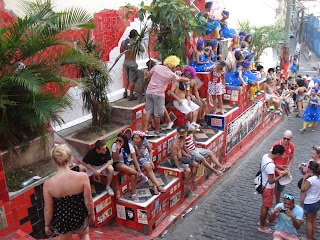 I had my fair share of Ecuadorian Carnaval last year, after walking the Sangolquí parade route home from the library, alone, with my backpack and blonde hair (aka wearing a big red target). I was barely recognizable when I made it to the house, covered in flower, water, foam spray, dye, and whatever else my vecinos decided to throw at me along the way. So this year I headed east, to see how they celebrate in Rio de Janeiro, the Brazililan city known for having the biggest Carnaval celebration in the World… and for a good reason! I arrived in the midst of the first weekend of the celebration, which the Brazilians take very seriously and I was relieved to see there wasn’t an egg-throwing teenager in sight. The streets of Rio were full of guys in dresses, elaborate Carnaval costumes, and people of all ages dancing samba in the street. The celebration lasted all day and all night… for five days straight. Sunday night we headed to the Sambadrome to see a little bit of the biggest show on the planet. I have never been so overwhelmed. We bought tickets to the parade around 2am, and the enormous rows of seating were still full of spectators waving flags to support their samba school of choice. We watched as literally thousands of costume-clad samba dancers passed, interspersed by gigantic floats built almost as high as the stadium seating. After about 40 minutes watching the steady flow of floats and dancers we picked up a program to see which groups we had seen… and realized it had all been part of one samba school! I still can’t believe the time and work that goes into the Carnaval preparation, and thousands of schools compete, for one week of celebration. While the parade was a once in a lifetime experience, the highlight of my Carnaval experience came the next day, while doing some sightseeing in the city. We visited the Selarón staircase in Lapa, city stairs that have been decorated by a mosaic of tiles from all over the world, a work of art by a Chilean artist that he says will only be completed on the day he dies. While admiring the artwork and searching for a tile from Ecuador, we all the sudden found ourselves in the middle of a bloco a moving street party playing live Samba music and dancing. Before we knew it we were surrounded by locals in costumes, singing and dancing, and climbing all over the stairs. We went with the flow, and joined in the party. Carnaval in Rio was a once in a lifetime experience, and one I highly recommend witnessing.

Heather
Posted by Unknown at 10:46 AM