(Today´s blog post comes from Dunc Fulton, a new MPIE PD whose mission this year is to put a bed in the kitchen...yes, THAT Dunc. He is a die-hard Tex Mex snob, has talked to just about every single person in all three towns about the small business classes he´s been organizing, and loves to listen to Holly tallk about Michael Phelps)

Following up on Holly’s promise several days ago, I will in fact devote my first guest blog entry to what is clearly one the greatest simple pleasures of living abroad: the glory that is Fanta. As I quickly learned 2 years ago during my first stint living abroad (when I spent a semester in Spain), the States just can not match the quality of Fanta that exists outside its boundaries. While strangely enough I am not a huge fan of soda in general, nothing beats an ice-cold Fanta out of a glass bottle. Fortunately, as I was able to discover one of our first weeks living in the Manna house, such a delicacy exists only a block away from our casa. One little street over, in fact, sits what is TV-commercial quality Fanta for only 20 cents a bottle! If there is to be a caveat, it lies in the fact that one must drink the Fanta inside the little tienda due to the high value of glass bottles in this country.

If, by chance, at this point in the entry you’re suddenly thinking, “Dunc must not understand that you can buy Fanta in the U.S,” I do actually realize this truth. However, there is an acute difference between your typical 7-11 plastic 20-oz. bottled Fanta stateside and the treasured glass-encompassed bottles that abound in Spanish-speaking countries. In case you were curious, a comprehensive Fanta hierarchy exists. As all wine connoisseurs out there surely agree, not every “year” for a particular brand is as good as the others. It is much the same with Fanta. Without further ado, here is the Fanta ranking in its entirety (ice-cold temperature is presumed): 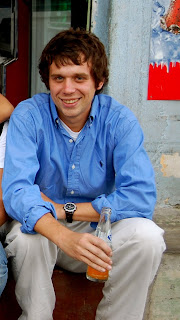 Do they wash the bottles?

Rice at Vandy this weekend. Both teams are undefeated.

Such a refined palate!

Diet Coke has as similar hierarchy. It begins with:
- 32 ounce fountain cup from Mustang Donuts, UP Texas; iced as mentioned above