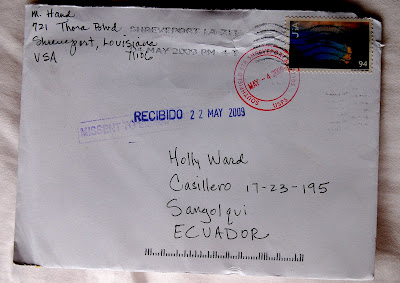 Making the trek out to our Postal Box in Sangolqui (a 45 minute bus ride-trek each way) is always slightly depressing. Since it's such an ordeal to head out there, we usually only check it once or twice every month. Therein lies the depressing part: even after a whole MONTH of not checking it, we usually have one measly little letter from one of our Universities asking for money (how'd they FIND US?!). Every time I head out there, I find myself talking down my expectations.

Ok, so perhaps I'm giving over to my more dramatic tendencies. There was that amazing letter I got back in November from Ashley, and the homemade Valentine complete with a sparkling Wizard of Oz shoe-decal from Kaili. And don't get me started on the packages Dunc's mom has sent him; they're incredible. Actually, alright, now that I think about it we've gotten some great things from almost all our families during the past 10 months. Thanks Moms!

On Thursday, however, I got something incredible. I didn't even go to the Post Office so it was even more of a surprise when Dunc handed me a letter. Inside I found one of the paintings Marjorie had done on one of the many afternoons in Children's Art, beautifully rendered onto a stationary card. Minette Hand (younger sister of Country Director Mark Hand) had emailed me a few months back to see if I might be able to take pictures of some of my students' artwork and email them over to her so she could make cards as a fundraising tool. I did it and then quickly forgot about it, moving on to planning for Thanksgiving and trying in vain to learn Ecuadorian long division.

Melanie Hand (Mark's mom), it turns out, hadn't forgotten. She was kind enough to send a card down to me in Ecuador. I almost teared up in the kitchen (effectively freaking Dunc and Mark out) as I opened it. Marjorie will be so excited when I show it to her on Monday. What pride she will feel when she sees her artwork on a beautiful piece of stationary!

Thank you, Minette and Melanie, so so much.
Holly 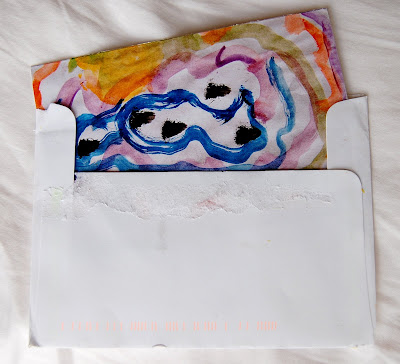 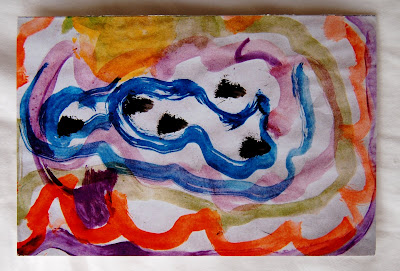 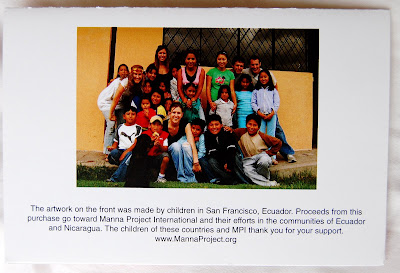 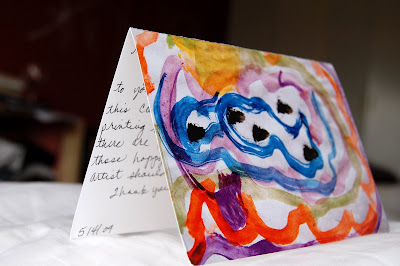 HOw do we buy these cards?