A few weeks ago, 10 de Agosto was simply one of a dozen confusing historically dated street names in central Quito. But this August 10th is a bit different, being the 200th anniversary of Quito's independence and all. Sunday evening all nine of us new PDs wandered into downtown Quito for the the Bicentennial. From the minute we stepped off of the bus, swarms of Ecuadorians surrounded us, all headed for any one of the area's countless plazas. It was a nice change of pace to walk around streets closed for pedestrians only, rather than the usual custom of getting honked at for being too close to the edge of the sidewalk. 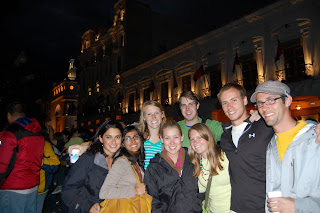 Sarah taking a beautiful picture of the PDs in Plaza Grande (From left to right: Shawn, Sonia, Haley, Krysta, Chet, Jackie, Erik, and Mike)
While heading towards Plaza Grande, we stumbled upon what appeared to be a dress rehearsal for the Ecuadorian Symphony Orchestra, whose performance was supposed to begin within 15 minutes. However, being accustomed to Ecuadorian time (a.k.a. late), we knew that likely would not be the case. Even though we were shoved pretty far back, we had a very decent view of the stage (thank you Ecuadorians for making us less-than-5'5'' constituents feel tall). By coincidence, we wound up right in front of the Ecuadorian equivalent of the White House just before Rafael Correa, who was just sworn in for his second term in office yesterday, came out to say hello to the crowd.

Sarah enjoying being squished into Chet

An aerial view of the crowd

Me laughing at Krysta's whistle for Correa
While making our way towards Plaza San Francisco, we were stopped by soldiers making a passageway for Correa to walk on stage (again, by sheer luck). We held our ground against shoving groups and watched as he strode past, shaking hands and patting niños on the head. After grabbing empanadas for dinner we met up with Bibi (see yesterday's blog for an interview with our exceptional country director). We spent the remainder of the evening plaza hopping, and eventually ending up at Plaza Santa Domingo

to watch the Conocoto Youth Orchestra (represent!) play an amazing set. We showed off our truly American dance moves, including but not limited to the lawn mower, the bicycle pump, washing the clothes, and milking the cow. As some looked at us in disbelief (including fellow PD Erik), most joined in. A group of adolescent Ecuadorians even came up to Mike to instigate a conga line that we all, of course, joined in for.
As midnight approached, we caught some fireworks in Conocoto and shimmied our way back home to get ready for another jam packed week in the valley. Not a bad way to spend the last few weeks of summer, eh?
- Jackie
Posted by Jackie at 9:56 PM

eh? are you from canada dear fellow PD? How did i not know this before... ;)