August is a tricky time of the year in terms of programs. The previous season’s programs wound down in early July, which coincided with the arrival of new PDs, the writing of transition reports and the actual task of turning over. Thus, running the normal schedule of programs wasn't entirely feasible. So the question became: how do we keep up attendance at the library/teen center and build excitement about the programs beginning in September, while continuing to increase awareness about the library and expanding our base of patrons?

Thanks to the creativity and detailed planning of Seth and Dana, we are in the second week of our summer camp for teens. Each day from 9am – 1pm, Seth, Dana and a handful of new PDs are in charge of playing games, teaching cooking lessons and leading field trips for the teens. Today, Seth, Krysta and I took the 10 teens to one of the largest radio stations in the valley, which is based in Sangolquí. The people at the radio station have been unbelievably supportive of MPI, and volunteered to give the teens a talk about how a radio station functions, as well as a tour of the office. What we didn't realize was that we were all about to be thrown (kicking and screaming?) into a live radio interview...

The man in charge of the radio station (whose name I can’t remember for the life of me, and therefore will be called "radio man" from here on out) gave each of the teens the opportunity to introduce him or herself, say where he or she is from, and give a shout-out to whoever he or she pleased. At first no one was willing to volunteer, but after a few turns, the teens got the hang of it. They eased out of their shyness and insisted on harassing one another by saying, "So-and-so forgot to give a shout-out to what's-her-face and she's his special friend," in the characteristic teenage high-pitched nagging voice, to which the rest of the group responded with fits of giggles. To be young again. :)

Krysta and I were thoroughly enjoying the chaos from the corner of the interview room, until we heard the radio man mention that the gringos hadn’t said anything yet. I, of course, got dragged to the microphone first and promptly forgot everything - including how to form words and string together coherent sentences. The radio man caught onto my inability to speak and asked me (on live radio) if I spoke any Spanish. I responded with an incoherent stutter and a shrug. Krysta followed up my stellar performance by fluently and gracefully describing how excited she is to meet our fellow community members and explaining what we hope to accomplish during our year in the valley. Looks like Krysta just found herself a backup to PA school, while our teens were introduced to a potential career path. I, on the other hand, won't hold my breath.

Confession: I forgot to bring the trusty MannaCam on the radio outing today. You have my sincerest apologies. I promise to be a better photographer in the future... but until then, here are a handful of pictures from our Despedida, or going-away party, at the library last Friday. Enjoy! 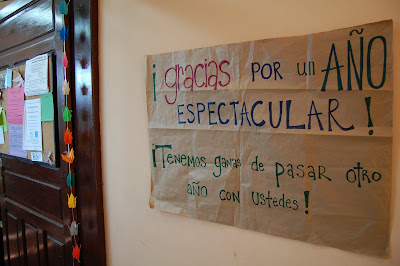 The entrance to the library
"Thank you for a spectacular year! We are excited to spend another year with you!" 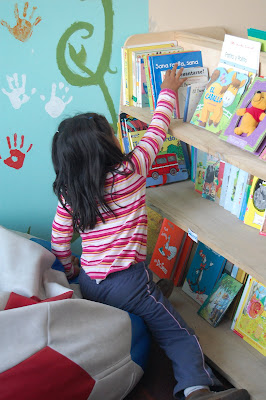 An eager reader peruses the shelves in the kids' corner 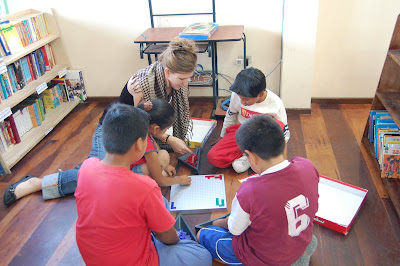 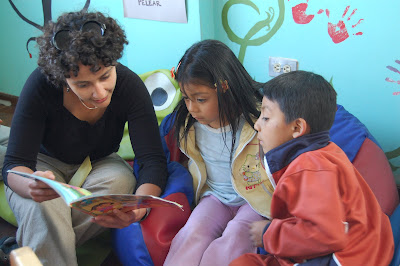 Bibi works her magic with the kids - just look at those faces! 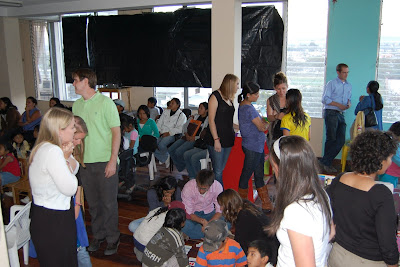 A packed library = a very successful despedida
Posted by Sarah at 7:35 PM