This morning, sometime circa 4:45am, Jocelyn and I started making a list of everything I have to daily life blog about after this weekend. No, we’re not insomniacs; the overnight bus we all hopped on Sunday night at 10pm had broken down somewhere in the Ecuadorian countryside, and we were all cuddled around, cranking at each other in garbled Spanglish and trying to focus on all the good that came from Cuenca. Which was a really easy task for Jos and I once we started. Thus follows the list I have to build from this week in the daily life blog.

1. 10 hour bus ride out to Cuenca, the first 2 hours of which were spent listening/watching/avoiding Big Mama’s House, dubbed in horrifically hysterical Spanish.
2. The incredible architecture of downtown Cuenca, especially the central church. 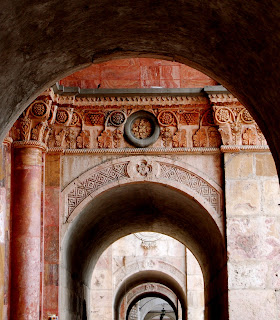 3. The random break-dance off we came across taking place in a gazebo in the middle of Cuenca
4. The feisty (read: MEAN) little old Ecuadorian woman who became incredibly territorial while washing her clothes in the local river, ending in her running at us with a stick. 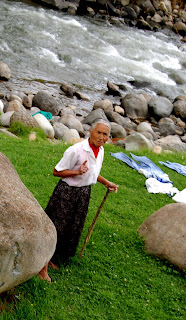 (right before she started using the stick as a weapon, photo taken from inside my purse...)

5. The Ecuadorian election which happened this weekend, deciding whether or not to pass the new constitution put forth by Corea. Voting in Ecuador is mandatory, thus everyone was traveling, voting, and conversing about it all weekend.
6. Cajas National Park. Incredible. 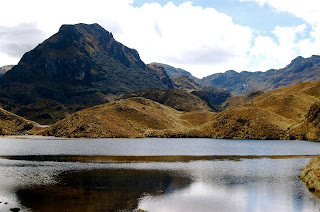 7. Our encounter with a self-declared ‘revolutionary’ dressed up as Che, who owned a restaurant called Che, and served us a very strange almuerzo (coupled with a few anti-Bush tirades)
8. The visit to the Panama Hat Museum, and subsequent purchasing of said hats.

(Holly, Jocelyn, Dana (NEWBIE!!), and Serena modeling our new wears)
Thanks for tuning in to yet another wild week down on the Equator!
Holly
Posted by Holland at 11:55 PM

I love the hats girls..truly chic gangster look. What fun!