(Today's guest blog comes from Dana Conway, the newest PD to join the Manna Ecuador family. Dana hates 10 hour bus rides, has awesome taste in music, gets an amazing fresh fruit platter for breakfast every morning at her home-stay, and is the only one of us girls to have been facebook friended by Eliah. Lucky, lucky girl.)

"I've been spending my days in Quito doing language school for three weeks while everyone else is in the valley. While at times it gets a little lonesome without the crew, whom I bonded with literally upon arrival, I have been enjoying getting to know this massive city. Coming from Boulder, I´m not use to tall buildings, busy streets, hurried people. However I am easing my way into the chaos.
Yesterday was my first day exploring on my own taking public transportation, hailing cabs, asking locals for directions, etc. After a day of thrilling success I woke up this morning anticipating the same luck. To my dismay, I was kidding myself, to say the least. On the agenda was simply to venture into Old Town, check out the basilica, and make it back for class by 1:30. I hopped on a bus, and before I knew it was no where to be found on the hand held map I grasped in my palm. I quickly departed and began staring off into the midst of surrounding skyscrapers when a local Ecuadorian, at least 60 years old, asked what it was I was looking for. Upon telling him I was trying to find the basilica he insisted on escorting me the whole 25 minute walk through all kinds of hills and winding streets, enthralled by my Spanish ¨skills¨ or lack there of, (its hard to say,) literally to the front steps of the church, thank god, I never would have found it. And thank god, it was a maravillosa.
With the calculated perfect amount of time to return for class I headed in what I was now certain was the right direction to catch a bus back to my neighborhood. As I approached the doors to enter the parada, I was informed that the bus was not functioning and I would have to catch another line that may or may not be headed in the direction I needed to go, a blue one would be "best". I dogged the traffic of the maniac drivers that travel these streets and was lucky enough to find a blue bus that slowed down long enough for me to ask if it was heading in the right direction. With a rather ambiguous response I jumped on, bus still in motion, and crossed my fingers that I hadn't just purchased a non stop fair to the coast.
With broken Spanish, lots of patience, and a trying smile, the driver told me when to hop off and that I was now closer to home than I had been before. Perfect, right? Well 10 minutes till class and I had no idea where I was. Street names all ringing a bell, but not a single building I had seen before. Again I threw my head back wondering which direction next. A few more blocks, another corner, and finally, I saw the sign of an all too familiar travel agency I pass by everyday ´Happy Gringo¨. And that was when I realized I was home again. But not just home to the neighborhood I have been living in for the last two weeks, or home to the still foreign city I have been exploring, but home to what it is that I am doing for the next year, home to the experiences that will fill each of my days, and home to an adventure that has already been so fulfilling and satisfying, that I literally can not wait to get lost again." 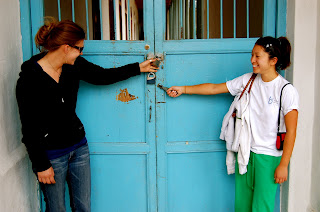 (Dana and Serena trying to force their way into the Medical History Museum in Cuenca)
Posted by Holland at 12:41 AM

Hi Holly- I just got to see Mark Hand while he is here at Vanderbilt so I promised to be better about reading this blog every day. What an exciting day you had. You are a brave soul!

Your mom linked me to open hands and dirty feet. Nice to read of your adventures. Keep on blogging. Be safe, work hard, have fun.