A Day in the Daily Life

(Today's guest blog comes from Eliah McCalla, also known around these parts as Snatch. The house vegetarian, Eliah once spent a solid 2 hours attempting to make hummus in our highly inefficient blender. A fierce Risk player and constant environmentalist, Eliah studied abroad in Ecuador and Chile during his time at Indiana University, which made the most recent World Cup game between the two that much more intense. Eliah also laughs everytime I walk into any room he's in; still not sure how to feel about that...)

"Before I start into my day, I have to give a shout out to the mangrove forests. As Holly's already told you, we spent this weekend tagging along with Seth as he visited his girlfriend in Guayaquil. Guayaquil is the largest city in Ecuador, situated about two hours from the beach, and everyone was excited to try the coastal food. I was not.

Ecuador's coast is home to over 100,000 hectares of mangrove forest, a type of coastal wetland. Mangroves are both one of the highest ecologically valued and most endangered ecosystems in the world. The same factors decimating mangroves around the globe has left Ecuador with only a fraction of its original mangrove coverage and the possibility of extinction for what remains. One of the primary factors in the destruction of mangrove forests is shrimp farms. Mangroves provide great habitat for shrimp, leading farmers to clear the forests to build their shrimp ponds. Sadly, these ponds only last a few years before they become too polluted to turn a profit, at which point the farmer moves to the next forest down the coast; this is the slash and burn method of getting shrimp to your plate (much of the shrimp consumed in the US is produced in this fashion). Not that these facts kept any of the other members of Manna from getting that oh-so-appetizing shrimp ceviche, but at least it came with a heaping side order of guilt. Which is why no one wants to go on vacation with an environmentalist.

And now on to my day. I'm the trash man here at Manna House, a job with the downside of making me sometimes smell like trash, but which also gives me an excuse to only shower on trash days. Three times a week I place the trash in an elevated cage outside our house, where it is collected the next morning. The real problem is the cage, whose bars and spacing appear to be ergonomically designed for dog snouts. This leads to the periodic nocturnal redecoration of our sidewalk, requiring that the trash be returned to its bag and resulting in me smelling like trash in an off day, which really throws off my shower schedule. Clearly, something had to be done. So today I took the step of buying some finely-spaced metal grates to insert in the cage. Bending the grates to size and taking pliers to wires holding them in place, I must have appeared to be doing something unspeakable to the neighborhood cage, because many of the passerbys looked at me as if there were a serial flasher on the loose and I was wearing a trench coat. Unperturbed, I carried on with my work, and the cage is now safe from the canine menace. Ah yes, it's been a slow news day here at Manna House.

Things should heat up tonight though, as we head into Quito for the last presidential debate. Former PDs Zak Schwarzman, Luke Lockwood, and I, along with fellow ex-pat Dan O'Maley have been organizing viewings of the debates for gringos in Quito, ostensibly as a way to get them their absentee ballots, but actually with ulterior motives. Because tonight, surrounded by 142 Americans, sitting in an Irish pub, watching CNN and talking American politics, it'll feel like we never left home at all. And that's the way it should be. 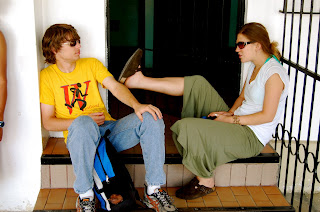 (Eliah and Dana bond in Guayaquil)
Posted by Holland at 5:28 PM

Great post, but my one comment has to do with your trying to make hummus with a sub-par blender. Is there anything worse in life? I burned the motor out of a blender once trying to grind down the garbanzo beans.