Thursday evenings are long ones for the girls of the Manna House; from Apoyo Escolar we head to two different English classes, and then reconvene at 7 for our rousing hour and a half of women’s exercise (which was pretty hysterical tonight; think 23 women, most STILL wearing sweaters, ages ranging from 5 year old Marjorie who tagged along with her mom to a 68 year old grandma who wore her shawl the entire workout). We staggered into the house tonight at 9:15, only to be greeted by the boys deep in a game of, you guessed it, RISK and sprawled all over the dining room table. After maneuvering some of their little soldier pieces over to the side, we proceeded to scarf down Mark and Eliah’s dinner, all the while being completely ignored by the guys who were so enchanted with their world domination strategies that they just couldn’t be bothered. And there you have a very telling example of life in the Manna house, the boys are playing RISK and the girls are eating.

After dinner we decided to put in Home Alone, which Jos got for her birthday (along with an exorbitant amount of chocolate). Translated horribly into Spanish as “El Pobre Angelito” (The Poor Little Angel), we’ve been talking about watching this movie ever since week two when Jocelyn realized she’d forgotten to bring it down with her. As the movie screened from the projector, popcorn popped in the microwave, and water boiled on the stove for hot chocolate, we all were transported back to our respective childhoods and the anticipation of Christmas fell around us all like a blanket. Yet, as Jos so correctly reminded us, we have to get through Halloween first :) 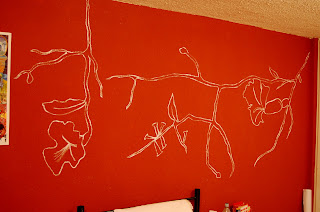 (the new sketch on my bedroom wall)
Posted by Holland at 12:21 AM