The mice will work on Saturday at our second Minga.

That was my weak attempt at a joke, trying to scare Mark (who is currently on a plane back to the states) into thinking all we're going to do for the next week is sit around feeding each other pineapple on our roof. He'll be gone for the next week, but honestly things are picking up so quickly down here that we really won't have much of a chance to even pretend to slack off in his absence :)

This post is late in coming today because we just got back from Quito, where we watched the Vice Presidential debate between Governor Palin and Senator Biden. Disclaimer: I promise I won't use the daily life blog as some kind of political platform from which to spew my ideas, unless those ideas include the establishment of a mandatory dessert hour. While we were all nervous (and some of us a little too eager) to watch Palin after having youtubed her interview with Katie Couric many times, overall both candidates presented their platforms in respectable manners. Which platform is respectable in its own right I'll leave up to you to decide for yourself.

I write about this because, for the first time in our lives, we’re experiencing a presidential election while not actually living in the States. Granted, most (all?) of us have only been able to vote in one prior presidential election, so a precedent hasn’t really been established. Yet it is incredible how passionate we’re all feeling about the whole deal. It’s as if the distance has made us even more involved, wanting so badly to taste the electoral anticipation and read as many articles and editorials as we can, to keep track of our state’s polls and to find key policy pieces which tie us to certain candidates. Maybe every young person experiences this as they become more aware of the scope of elections, but this time around it just feels different; fresher, bigger, closer. And that, written from south of the Equator, is truly saying something. 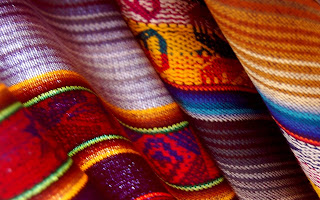 (colors in our curtains)
Posted by Holland at 11:51 PM