Now first things first - what exactly is a barrio? A barrio is a small community, or perhaps a large neighborhood (from what I can tell); the divisions between them are apparent only if you know which street is what. Our library is located within the barrio of Rumiloma, but we are within close walking distance to San Fransisco, Tena, Fajardo, Chaupitena and a few others. Each barrio has its own president, and it just so happens that Rumiloma elected a new president just a few weeks ago. The president-elect, Mr. Jose Vilane, has shown a great deal of interest in our library and what we are doing within the community. He even stopped by the library a few weeks ago to formally invite us to his presidential inauguration.

Nine PDs and Bibi rolled up to the Casa Barrial last Saturday afternoon, after spending the morning picking up trash for the minga. The fanfare was significantly smaller than that of Washington DC last January, but it was exciting nonetheless. We shared the room with presidents from several neighboring barrios, presidents of the major bus companies, and a representative from Sangolqui. In the speeches given by Mr. Vilane and several community members, we (the "senoritas" of Manna Project... sorry about that, boys...) were thanked repeatedly for the work that we have done and continue to do in Rumiloma. One man said he has been living in another barrio for over 10 years, but that he is seriously considering moving to Rumiloma because of the numerous unique opportunities that exist here - including our library.

The short ceremony ended less than 1.5 hours later, after a free almuerzo (that I actually ate) and a lot of "Que le vaya bien's" to each of the people sitting at the front of the room (it's Ecuadorian custom that you greet and/or say goodbye to everyone in the room). As we jumped back onto the bus and set off for our various Saturday night activities, I (at least) felt a sense of contentment about what we are doing in Rumiloma and our surrounding communities. It was nice to be reassured that we are making an impact.

Thanks for checking in! Off to the biblioteca and Women's Exercise! (It's aerobics night... lots of squats... ay.)
Sarah 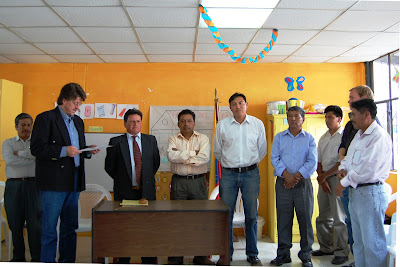 The men at the front of the room... and the random gringo who was invited to sit up there, too
(the President is the one with the tie... and you can see Erik's blond head over to the right) 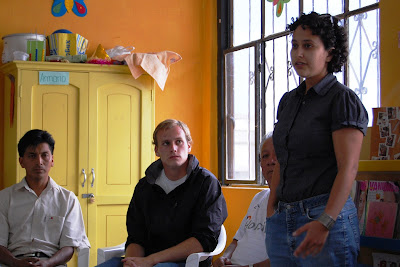 PS. The Casa Barrial doubles as a pre-school... can you tell by the pictures? :)
PPS. Check out our new and improved (i.e. updated) Amazon Wishlist link to the right!
Posted by Sarah at 1:19 PM

Did Mark give you guys that map of the whole of Sangolqui? I think I labeled most of the barrios in the area and their borders on there.