It's officially October and you know what that means... MLB playoffs!  As well as some Ecuadorian-specific things, such as the beginning of the rainy season.  Tonight was the first Camioneta ride home in the rain and half of us were really prepared (perhaps too prepared.. cough cough Chet put on rain paints over his jeans) while others braved the pelting wind in tee-shirts.
But the rain also means exciting things for us, specifically less dust to wipe off of our faces at the end of the day AND the start of our vegetable/herb garden!  While our original plan was to use the expertly-crafted boxes Eliah built for a rooftop garden, their services were heavily demanded for compost containers when it became clear that the nine of us consume a lot of food.  So at least for now, we've decided to focus on revamping the courtyard, which no offense to last year's PDs, is pretty gross.  We have two plots on either side of our walkway, one to be used for our vegetable and herb garden (featuring plantas de tomatoes, onions, mint, basil, and lettuce) and the other to be used for small lime trees and aromatic flora. 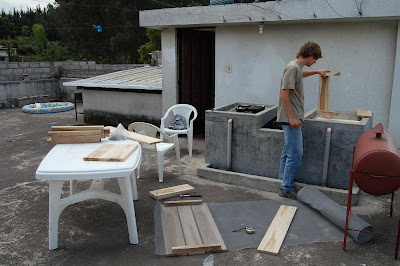 Eliah demonstrating his craftsmanship back in August 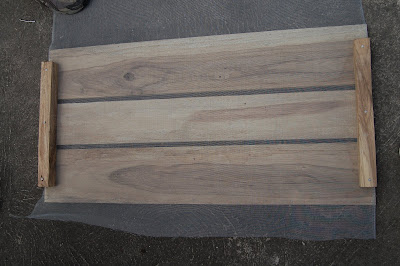 A closer look at the box base
I'll be using part of this three day weekend to weed and plant, while the other half will be spent at the Ecuador vs. Colombia (World cup qualifier!) futbol game this Saturday.  If you can, be sure to check it out and look for the five Gringos somewhere in the crowd... that is assuming we can claim our tickets (we've been having some difficulty finding the box office open).
Time to get back baseball and listen on Shawn's radio to the Yankees beat the Twins...
Don't you just love October?
- Jackie
Posted by Jackie at 8:17 PM

"aromatic flora"
you are too cool for me.

Better check with Sylvia before you cut down any of those trees!

Mark I would hope that you knew me better... i would never cut down a tree! just need to trim them up a bit...