This past Saturday marked our first Minga of the year.  (Minga |meen-gah|noun: an Ecuadorian word for people coming together to do a community service project)
Nine PDs awoke at 6:45 a.m. to the smell of brewing coffee and a scramble to collect brooms, gloves, and as many trash bags as we could find.  Though we sleepily commuted into Rumiloma, we perked right up as we stepped off of the bus to find a dozen kids and parents already gathered in front of the library, ready to clean up their community.  As we split into groups to tackle the various neighborhood streets and sidewalks, we found many residents cleaning streets and sidewalks by their homes as well, asking us to borrow supplies. 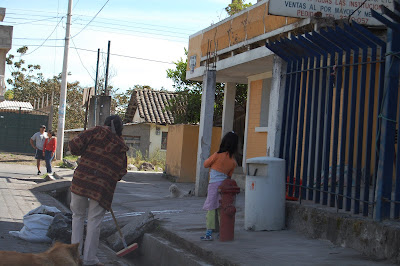 Our neighbors, brushing up garbage from the drain pipes
We spent the better part of 3 hours cleaning up around Rumiloma; my main job was to run around making sure everyone had enough trash bags, haul full bags back to the library, label them with kids' names and then weigh them to keep track of which kid collected the most, by volume.  By 11a.m. we had run out of bags (something I never thought would happen given the amount we stole from the house and wiped out of the library stash) and rounded up all of the kids in the library to tally the weight results, which are the following:
Total Combined Kids' Weight: 376.5 lbs
Total Combined Profe's Weight: 70 lbs (plus Sarah's 2 tires)
------------------------------
Total Weight: 446.5 lbs 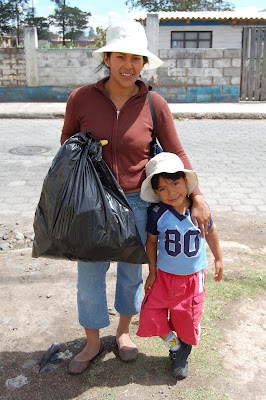 Team Iori proudly showing off their loot
A few notes about the weights: the profes had significantly less weight because we mostly helped the kids (we're not lazy, don't worry) and there was an estimate of 60-70 lbs not weighed that were left on street corners, where other residents were instructed to put their trash for pick up.  Though there were only 4 kids who got our grande sopresa, we dolled out lollipops to the other kids who answered our environmental quiz questions correctly and provided other refreshments for the families. 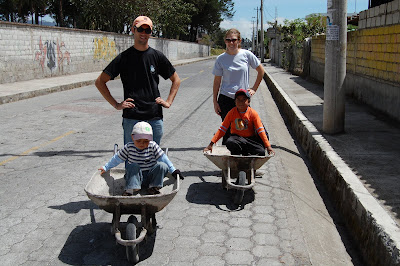 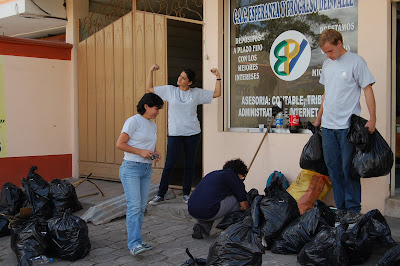 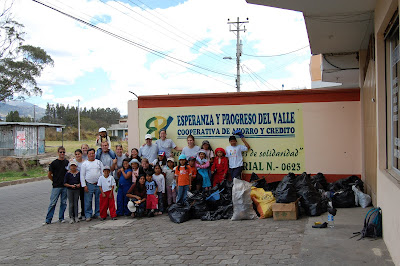 The whole group in front of 450lbs. of collected trash! 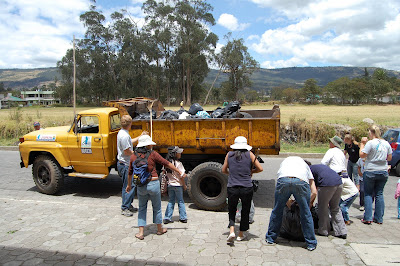 Everyone helps throw trash bags into the truck
Some people question the sustainability of such an event, wondering if the streets will simply become riddled with garbage again a week later.  While that reality is more likely than not, clean-ups are a powerful tool for a number of reasons: they bring people together, engage them in a service dedicated to the area where they live, and quite frankly, after participating in something like picking up trash for house, you tend to think twice about dropping a candy wrapper onto the street.
The event also opens the door for bigger projects.  There are two major trash issues in Rumiloma: burning household trash, mostly out of habit since there are reliable waste haulers now, and water contamination as a result of excessive litter and agricultural/livestock practices.  It is a priority of our environmental program here in Ecuador to tackle both issues in collaboration with USAID, FONAG (El Fondo de protección del agua), and most importantly, local leaders and organizations.   But I'm getting ahead of myself.. you'll have to wait to hear more about that in future posts!
Litter-less and feeling free (not really because quarterly reports are due next week!),
Jackie
Posted by Jackie at 6:59 PM

my tire and piece of roofing did NOT get weighed. i would like a re-weighing, thank you very much. you can give me my lollipop at a later date. you know where i live.