This week's guest blog comes from our boss, leader, and most importantly, friend and compañera, Bibi Al-Ebrahim. Bibi more or less started her time with Manna at the same time as us and has been doing an unbelievable job guiding our projects, running her own, and moderating anything and everything that happens in the house. We look up to her for most everything including motivational talks, coffee-making skills, and (especially) fierce leadership on the soccer field. Thanks for putting up with all of our antics; we love you B-squared!

"I haven’t told anyone, but I think I may be falling in love. I don’t want to admit it, or lose any street cred, but it’s true, I am falling in love…with a group of people - all younger than me. I never anticipated the extent of such a sentiment and had you told me a few months ago, I would have called you crazy for thinking it possible. But here I am, months into our adventure together, and I find myself always thinking about, and even missing them. It’s not healthy, and although I have yet to draw ‘Bibi hearts Ecuador10’ in my notebook, I never-the-less always find myself wondering about what they’re doing, whether they’re safe, what they’re learning, and even what cool idea they’re going to come up with next.


Maybe I’m exaggerating a bit. I just read the first guest blog I wrote months ago when I was considered to be in the ‘transition stage’ of the Country Director position. I did anticipate some of this happening, but like I said, not to this extent. As predicted, this group of PDs, my first, has been an incredibly influential group - impressing upon me positive and lifelong experiences and lessons learned. How could that not carry or llevar some sentiment of love?

Now, you may be asking why I’ve chosen to write about this in my second guest blog and not about something more Country Director-like, such as programs, or community affairs, or organizational future plans. I’ve chosen to write something cursi (cheesey), because 1) the PDs have been doing a great job updating you with programs and community affairs; 2) sometimes I think it’s necessary step back, see the bigger picture, and focus on the positive; and 3) I’ve just finished one-on-ones. For the last four weeks, I have spent a few hours with each PD, alone. Most have been lunch dates, and typically meant trying something new and adding some variety to my not-so-diverse diet. We spend the few hours together talking about social contentedness, professional fulfillment, personal tidbits that often only come up in more intimate settings, and how their overall experience could be improved.

A few pounds heavier, I proudly confess to the blogging world upon completing all the one-on-ones, that my love for this group of PDs is deep and true. Incredibly different, at first, the group didn’t have the chemistry many wished for or even expected, but they have worked non-stop to build, from great differences, friendships. It is clear that despite the constant loss for words and confusion of living in a different country, the glue that binds this group together is Ecuador and our work. With a few last words, Ecuador10, I would like to say something positive, as both motivation and straight up recognition; I tip my hat to you, for sticking with each other despite the occasional (or not so occasional) aggravation of it, for sticking with Ecuador even when you’ve been so uncomfortable you’ve wanted to hide, and in light of all of that, finding a way to make this year happen. 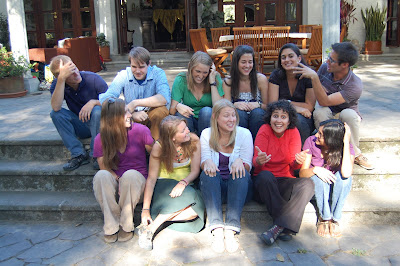