When Nomads Come Together

Tonight's guest blog comes from Erik Swanson, a native-born Tennessean but Coloradan ski/snowboarder at heart.  Erik is both one of my apartment-mates, and Minga extraordinaire with whom I'm co-running a community clean-up in Rumiloma this Saturday.  On top of that, he is co-running the Microfinance program with Chet and running around the valley in recruiting university students to volunteer in our library.  In his spare time he enjoys weekly trips to a hole-in-the-wall Chinese restaurant (and bringing us lots of dumpling leftovers!) and playing rugby on the weekends, which is what he chose to write about tonight:
"During my freshman year of college, the sport of Rugby became a formidable part of my life. In the recruitment meeting, many of the seniors talked about the worldwide community that the sport has slowly created over the years. I quickly came to realize the unique camaraderie that rugby players share, especially at the social that follows a game (or "third half").
During the application process for Manna Project, I noticed many differences between the Nicaragua and Ecuador programs, most notably the "Minga" program that is unique to MPI-Ecuador and that I believe best falls into line with my past experience with Amigos de las Americas. I also noticed that there would not be a chance for me to play rugby had I chosen MPI-Nicaragua. Knowing that there were more than a few teams in Ecuador, and 3 in Quito, I wanted to put what the seniors told us all about in that initial meeting to the test. 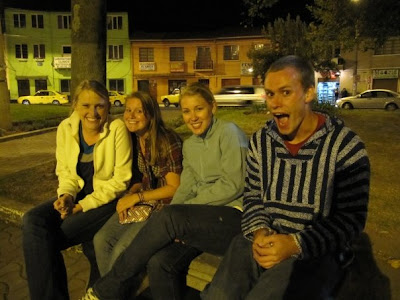 Though his hair is longer now, this is a classic Erik face
I found Nomadas R.F.C and quickly got into contact with Miguel Montes, the captain of the team, who invited me to a tournament at the Universidad Catolica in Quito that Saturday. I quickly found out that the team was composed of expatriates from all over the world (hence the name Nomadas R.F.C or Nomad Rugby Football Club). I was amazed by the fact that people from Argentina, Venezuela, Chile, Colombia, France, the UK, and the states had all come together to form this team. Despite the fact that the Argentines generally provide most of the comedic relief, it is an extremely welcoming community, holding everything said in that first recruitment meeting to be true. I am extremely thankful for the opportunity to play the sport in South America, but even more grateful for the opportunity to instantly step into a group of people that legitimately accept each other as they are. The ability to so quickly find like-minded people has augmented every aspect of my life in Ecuador.

We practice in a French school in Quito known as La Condamine, mostly because one of our players manages the grounds. The field is located on the northern side of Parque La Carolina. Despite the occasional presence of multiple llamas on the field, I gladly dedicate my Saturday mornings to training with Nomadas R.F.C. 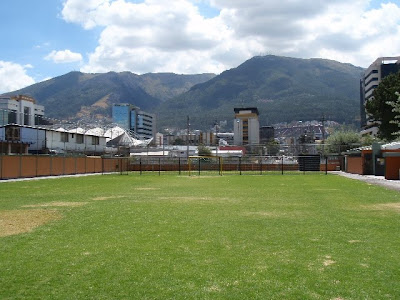 The field at La Condamine (llamas regretfully not included)
- Erik"
Posted by Jackie at 4:08 PM

Jackie, thanks for the nice introduction for my young man! Sent a package today including our family's favorite cookies. Hope it arrives without any problems.
Rhonda (Erik's mom)

Erik, this is awesome! I loved reading about it and am bummed I didn't get to see you play while I was down there. Keep it up!