Krysta, Jackie, Haley, Chet, Mike and I were pumped about the idea of joining an Ecuadorian soccer league when Bibi mentioned it about a month ago. The six of us joined the respective men's and women's Ruminahui teams... and have gotten ourselves into quite the adventure. In the last few weeks we've paid our dues, received our uniforms, and participated in our first games.

I can't speak for the men, but I will say that being on the women's team has been pretty funny thus far. We had our first practice two weeks ago, which entailed scooping the entire field clear of dog poop before starting drills. Our coach placed the order for our uniforms, and subsequently got us jerseys an average of 2 sizes too big per person (Chet, Haley and Krysta wear the same size, if that gives you any idea...). And our starting lineup includes Bibi (who is surprisingly good), Krysta (who is known for her volleyball skillz), Jackie (who is chastised by the coach about 98% of the time), Haley (who has never played soccer) and me (who last played soccer in the non-scored YMCA league in 3rd grade). We're clearly a force to be reckoned with...

Here's a brief list of the good and the bad:
Good -
1. Jackiepants scored our first goal of the season. Perhaps the coach won't be able to yell at her as much...
2. The 6 of us have super sweet matching uniforms (even if they're HUGE). I, for one, will be sporting mine with pride. We're so legit. (Too legit to quit. En serio.)
3. The other teams don't know what we're saying when we yell to each other on the field. (Or if insults are tossed around after being knocked to the ground... several times...)

Bad -
1. Both teams lost last Sunday. But since we've added hill workouts and soccer drills to our daily routines, I expect big turnarounds. :) Ha.
2. Sprinting up and down a very uneven soccer field is just not the same at 2500m altitude.
3. Soreness. Lots of it. Who knew those muscles existed? 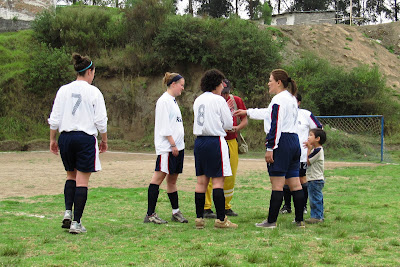 Our team meets for a huddle before the game
(Bibi is #8, Jackie is next to Bibi, and Sarah is #7) 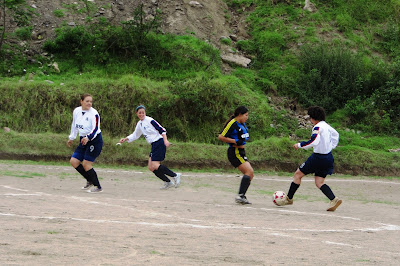 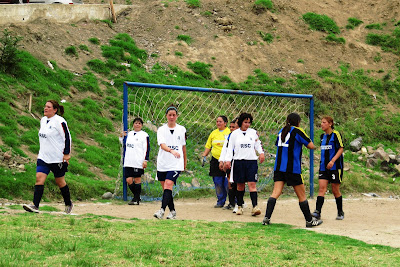 Taking a breather... the ball was probably booted into the highway or something similar.

Both teams are playing this weekend... we'll keep you posted.

Thanks for checking in!
ss
Posted by Sarah at 9:12 PM

Email ThisBlogThis!Share to TwitterShare to FacebookShare to Pinterest
Labels: futbol